By clicking Sign Up, you agree to our Terms of Use and that you have read our Privacy Policy
Skip to content
Greg Vore
By Cori Murray · Updated October 27, 2020
Shaded by palm trees, hairstylist Derick Monroe stands next to a wooden canopy bed carved with Arabic and Swahili flourishes. He’s on the balcony of the Zanzibar Serena Hotel and a warm breeze from Indian Ocean wraps around him like a familiar embrace. “I cannot believe this is Africa,” says Monroe. He and the ESSENCE cover team have just arrived in Stone Town, the Old World coastal city in Zanzibar—one of two islands off the coast of Tanzania. Encouraged by the hashtag #seesomeworld, we decided to well, see some world. We mapped a route to Tanzania and Kenya as the backdrop for our Global issue shoots. We invited Erykah Badu to be on our cover; for 10 days in early June, we traipsed between Kilimanjaro, Arusha, Moshi, the Serengeti and Zanzibar in Tanzania and Nairobi, Kenya. A look back at the moments that made our Global issue come to life. JAMBO! Landing in Kilimanjaro just before midnight, the team’s relived, anxious and slightly exhausted now that we’ve finally made it to Africa. Our hotel, Arusha Coffee Lodge is a 45 minute drive from the airport, but thankfully they kept the kitchen open and we enjoy our first meal before turning in. In the morning, our first safari stop is about a 40 minute drive from the lodge. Tanzania has 16 national parks and Arusha National Park is the smallest due to its proximity to the city. According to Tanzania National Parks director of tourism and marketing Ibrahim A. Mussa, we should see plenty of buffalo and zebra. He’s right. Just 10 minutes pass the park’s wooden gates, there’s a herd of buffalo resting in a field. A lone baboon slowly makes its way towards our minivan, before casually shimmeying up a tree. A few hours later we arrive in Moshi for our caravan flight to the Serengeti (if we drove, it would have taken up to 8 hours). Four open-air SUVs await to take us on our first game drive. Our locally hired photo assistant, wildlife photographer Paul Joynson-Hicks advises we’re in for a real treat. Although it’s been raining on and off all day, the sun’s finally breaking through and casting the most translucent light over the plains: perfect conditions for capturing an Instagram worthy sunset.

And so it begins in the Serengeti, #Tanzania #safari #nikon #africa #ontheroad #onAssignment #travelafrica #serengeti

It’s pitch black by the time we walk into our next hotel: Four Seasons Safari Lodge Serengeti. While stretching our limbs after the bumpy ride, we’re welcomed at the door with a glass of refreshing herbal tea and a joke: “How did you like your first African massage?” Maasai guards escort us to our rooms, where we freshen up before our traditional Tanzanian buffet. If you’re pausing at Maasai guards escort… I should be clear that yes, we were at the Four Seasons, but the hotel is centrally located where wildlife roam freely. Some ESSENCE team members woke up to baboons sitting on their terraces; another saw elephants in the distant outside their window. So the Maasai serve as cautionary guides, and as one reminded me when he pointed out a baboon sitting high upon a rock near my room, “That’s his home.”

This is not a joke…our makeup artist, @frankguyton, had his room ransacked by an “assertive and curious” baboon. #essencetravels #essencemag

Just after 10 am, we’re having our first full day shooting in the plains of the Serengeti. Back in Arusha, Mussa gave us an overview of what we’d expect. For instance, we’ve arrived at the start of the wildebeest migration. Nearly a million wildebeest will go across the Serengeti to Kenya’s Masai Mari and back—a 1,200-mile trek. He assures that there’s abundant animal sighting in the Serengeti because “They aren’t hunted so they are not afraid,” says Mussa. “We don’t interfere with nature.” While on location, the team was excited (and a little nervous) when a herd of wildebeest started making their way towards our vehicles. Photographer Greg Vore wanted to capture the moment and our model Tshepiso “Tee-Tee” Ralehlathe was up for the challenge. We think it turned out fantastic. Sunrises and Sunsets in the Serengeti With a call time of 5:30 am and trepidations about flying hundreds of feet in the air, the team was a little nervous when we arrived at the launch site of our hot air balloon ride. Uneasy feelings gave way to absolute gratitude as the sun started rising and the sky’s deep purples faded into neon pinks, oranges, and corals. Seeing the majestic vastness of the Serengeti is best from up high. Back on the ground, we were in for an unexpected treat: breakfast in the “bush.” Waiters, dressed as Zanzibari sultans, serve a traditional English breakfast on a nearly 12-foot table perfectly set under an acacia tree. It’s very “Out of Africa” and hate or love the reference, once you sip locally grown coffee while looking out over Serengeti plains, well, corny becomes cool.

Although we were here for one half day and night, the Serengeti Serena Safari Lodge gave the team their first taste of Tanzanian culture through music. At dusk, a musical troupe serenaded us on the terrace overlooking a ridge that gave the most epic views across the valley. By nightfall, we weren’t sure what was more intoxicating: the mimosas, the drumming or the sunset. You decide.

Street Styling Another morning, another caravan flight. We’re headed to Zanzibar, whose azure waters and tin-roofed homes were a scenery jolt compared to the thatched domas we left in the Serengeti. We’re peeling off layers too; in Zanzibar weather averages the mid 70s in June. From the airport, it’s a short drive to Zanzibar Serena Hotel. We’re transported back in time by the hotel’s Old World décor—which embraces Stone Town’s African, Arabic and Indian influences. But we didn’t come here to sightsee—we have to scout locations and produce a shoot by sundown. Our model and stylist Joiee Thorpe goes off to hair & make up, while the rest of team walks through Stone Town’s ancient streets, looking for the perfect backdrops for the denim shoot. 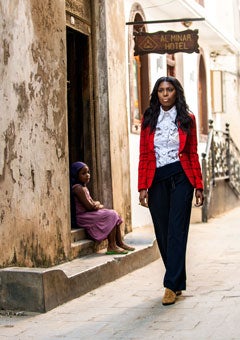 It’s day six and Erykah Badu has arrived in Zanzibar. She rightfully deserved a day of rest after her 23-hour flight from Dallas. But the ESSENCE cover team must hit the road—again. Packed into four minivans (one is just for our luggage and wardrobe), we drive 90 minutes to Kizmikazi Beach. We’ve come to shoot at the blissfully hidden The Residence Zanzibar. A boutique hotel made up of 66 villas, we’ll enjoy two nights as we shoot two of the country’s top stars: recording artist Vanessa Mdee and former Miss Tanzania and women’s health advocate Millen Magase. Erykah Badu will do the first of her two cover shoots here; photographer Warwick Saint and our creative director Erika Perry find just the right spot and prop: a grounded dhow on the beach while Erykah’s #BlackGirlMagic reflects off the Indian Ocean. 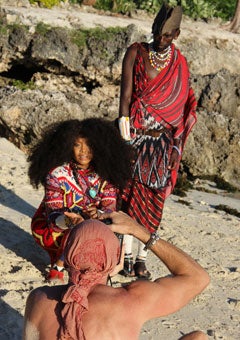 Hello Big City Nairobi’s streets bustle with cars, mini-trucks, buses, motor taxis and occasionally goats and cows. We’ve been forewarned about the standstill traffic (at one point our car didn’t move for 45 minutes). It takes us nearly 2 hours to get to our base at the incredibly chic and sexy DusitD2 Hotel. But riding to the lush grounds of the Giraffe Manor to photograph Erykah was worth the traffic.

Since being in Africa, we’ve done the safaris, the beaches, and the culture. Now we want to see something a little more Afripolitan. We visit the nearest Maasi market and lust over nearly every piece of colorful beaded jewelry our eyes lay upon. We adapt quickly and upgrade our haggling skills. Our style & beauty director Pamela Christiani scores a bountiful of necklaces, bracelets and shukas.

Later we drive over to Coke Studio Africa, which serves as an entertainment hub for artists from all over the continent to collaborate, share and make music. On our visit, we ran into our old/new friend Vanessa Mdee, who’s recording with Nigerian artist 2Face Idibia and Nigerian producer Cobhams Asuquo. The track they were rehearsing—which was written and perfected in a week—sounded so good, but won’t be able to hear the final version until October.

Not Without My Ellie When traveling with a group of people, there’s always someone who wants to do one thing really badly and rest of the group is indifferent. For us that someone was make-up artist Frank Guyton and that really bad thing he wanted to do: adopt a baby elephant. But once you spend 10 minutes with Frank you love him, so the group cheerfully made our way to The David Sheldrick Wildlife Trust, which sits on the edge of Nairobi’s National Park. Yes, we saw many elephants in their natural habitat in the Serengeti, but seeing these “ellies” up close, touching them and hearing the heartbreaking stories of how they were orphaned, made us all form a stronger connection to these animals. We were thankful Frank made it as last wish before leaving Africa.

Big thank you for PAUL JOYNSON-HICKS for capturing the team in the Serengeti. Asante Sana! //

ESSENCE team in the Serengeti shooting for the ESSENCE Global Issue which hits news stands this Friday. Check out the many stories I contributed. Photo by Paul Joynson-Hicks, http://www.pauljoynsonhicks.com Posted by Greg Vore on Monday, July 6, 2015