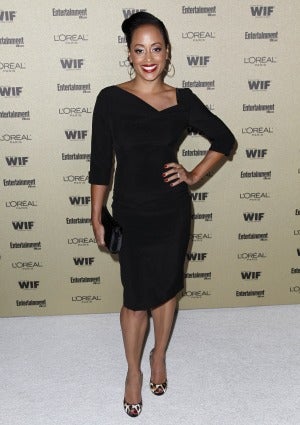 Most of us remember Essence Atkins from her role in “Half & Half,” while those who are a little younger may recognize her from “The Smart Guy.” Either way, we can all sit down and watch her each week on TBS’ super funny “Are We There Yet?”

The New York native, who not too long ago celebrated her one-year wedding anniversary, finds that her role on the small screen as Suzanne sometimes mirrors her own life. Find out why…

ESSENCE.com: Do you find similarities between yourself and your character Suzanne?
ESSENCE ATKINS: I was 37 when I got married. As strong independent Black women, we’re independent and accustomed to doing things our way. And when we’ve forged careers and our own destinies, it’s an adjustment to make room for someone else’s opinion and leadership. And Suzanne is going through the same thing but her situation is even more complicated because she has two children from her first husband. For me, it was just about me and my dog.

ESSENCE.com: How is it working with Ice Cube?
ATKINS: I love it. It’s a bit intimidating because he’s legendary and the man has been relevant since the ’80s. As an artist you can’t help but take pause and notice that someone has continued to evolve and challenge himself in music and now in television and film. So in that sense, it’s intimidating but he’s hilarious. I love playing his little sister. He brings great energy and is really supportive. And people sleep on the fact that he’s been married to his wife for almost 18 years. And they have a successful family, so he gets what the show is about.

ESSENCE.com: What can we expect from the second season?
ATKINS: The kids are growing up. We have a teenager and pre-teen in the house and we’re dealing with everything from Lindsey dating and learning to drive to whether we should ground Kevin after her gets into a fight, despite it being a noble gesture. There’s also the struggle between Nick and Suzanne to find romance. And there’s a bit of a power struggle going on in the house over things like who doles out punishments.

ESSENCE.com: TBS renewed the show for an additional 90 episodes. That’s a lot of TV. What is it about this project that would command such a big order?
ATKINS: A few factors came into play. For one, the quality of the show.  We did 10 episodes in 5 weeks. The show looks great and it’s funny. And you have a talent pool that’s very rich. From the actors to the writers to the show runner, Ali Leroy, who people know and love from “Everybody Hates Chris” and also as being an Emmy-award winning writer for Chris Rock. We have a great staff and producers. When you have all these people coming together to make a product and doing it in record time and for minimal amount of money compared to other productions, how could you not? It’s an intelligent business move.

ESSENCE.com: It seems like you guys have a lot of fun on the show…
ATKINS: Yes, sometimes I pinch myself. {Laughs}