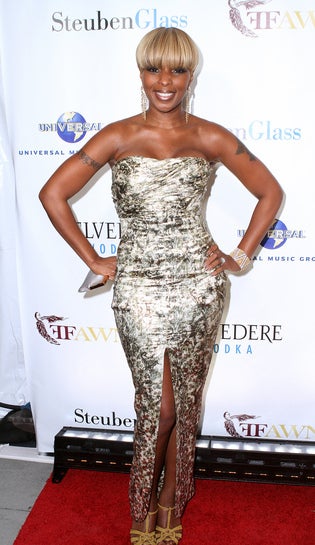 The commute on the subway in New York City is unpredictable. The one thing that I can expect is that my iTunes will be rocking, rolling or soothing during the train ride as I read The New York Times on my Kindle. Some days it’s a Mary J. Blige type of day — inspiration and real talk get my mind right. While other days are an empowered playlist of soul sisters: Lauryn Hill, Faith Evans and Keyshia Cole moments. And then there are the calm down days with Jill Scott, Sade or Anita Baker. Music sets the tone and soothes the spirit. I recently attended the Apollo’s 2010 Spring Benefit. It was called “An Evening of Legends, A Legendary Theater.” To celebrate its 75th Anniversary, the Apollo honored a King and a Queen: Michael Jackson and Aretha Franklin. Jamie Foxx was the host of the evening. The accomplished comedian, actor and singer improvised and imitated every song he could during the evening’s honors. But the most incredible moment of the night was when Aretha Franklin accepted her award. Jamie asked her to sing something before leaving the stage. Ms. Franklin did not miss a beat, hit it and started singing “Rock Steady.” Without a sound check, rehearsal or warm-up, Aretha illuminated the Apollo and had the audience on their feet, singing and swaying. He voice was so powerful — like a record. It’s clear why she is the Queen of Soul.

It’s great that we celebrate Black Music Month every June. I think it’s important to reflect on the sounds, lyrics and influences of the past so that we can appreciate our African-American culture and heritage — not to mention our African and Caribbean roots. Music is not strictly a Black thing, but we sure do own the rhythm, blues and soul that make it sound a lot more special. Think of the music of Ella Fitzgerald, Quincy Jones, James Brown, Patti LaBelle, Prince, Beyonce or Jay-Z to name a few — we put that special sauce in the verses, harmonies or beats that is indescribably Black, beautiful and full of boogie. After all, we did create gospel, jazz, rock ‘n’ roll, rhythm & blues, dance hall and hip hop. In 1979, President Jimmy Carter designated June as Black Music Month thanks to songwriter and producer Kenny Gamble, of the legendary Philadelphia Sound architects Gamble and Huff. The man who helped create classics like “I Love Music,” “If You Don’t Know Me By Now” and “Love Train” had once again had a profound effect on the sound of music — and history. A quote from the America.gov website sums it up best. “It is difficult to imagine American music without the rich and continuing innovations of African-Americans. These sounds are a treasured part of the nation’s cultural heritage. They continue to bring great enjoyment to millions.” This month is a great time to celebrate our incredible sonic selves. From the stunning Diva’s package in the June issue of ESSENCE to the extended digital deep dive on the cultural and stylistic influence of Patti LaBelle, Diana Ross, Aretha Franklin, Tina Turner and Chaka Khan on ESSENCE.com, the canon of Black Music is rich and transcends time. We launched a viral video for Ledisi’s “Real Woman”to kick off our ongoing campaign “I Love Being a Black Woman.” And this month we also honor the life and legacy of the late King of Pop, Michael Jackson on June 25, the anniversary of his death.

And then we have the ESSENCE Music Festival. It’s the first weekend in July and the perfect ovation for the best in Black music. Where else can you hear Janet Jackson, Alicia Keys, Mary J. Blige, L.L. Cool J, Gladys Knight, Monica, Jill Scott, Trey Songz, Ledisi, Earth, Wind and Fire and many, many others all in one weekend in the Superdome in New Orleans? President Barack Obama released a proclamation celebrating Black Music Month. He wrote: “Today, from the shores of Africa and the islands of the Caribbean to the jazz clubs of New Orleans and the music halls of Detroit, African American music reflects the rich sounds of many experiences, cultures, and locales. African American musicians have created and expanded a variety of musical genres, synthesizing diverse artistic traditions into a distinctive soundscape.” You see, Black Music is the soundtrack of our lives. Remember to feel the beat. For more of Emil’s Email blog, click here.