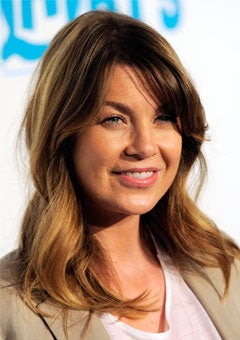 Did you know that giving birth to a Black child gives a White woman street cred to expound on race relations? Me neither.

Apparently actress Ellen Pompeo, aka Meredith from “Grey’s Anatomy,” thinks so. She’s married to Chris Ivery, a Black record producer, and they have a beautiful little girl named Stella Luna.

Last week on “The View,” Pompeo was asked about her plans to also adopt a Black child and if she were concerned about any possible backlash.

With some B-girl sass she responded that “no one can tell me nuttin’ because I had a Black child. “

She then went on to say something about keeping things racially separate is a bad thing, and that we don’t need the NAACP Awards, because there should just be “people” awards and that there isn’t a need for historically Black colleges and universities.

To make things worse, she kept adding, “my husband agrees” as the Black co-sign to actually legitimize her ignorant and completely inappropriate comments.

It really bugs me when White people, even those married to Black people, assume that our experience and our future agenda can be so easily understood simply by association or by pushing a bi-racial baby out of your loins.

Attention White people: marrying Black, birthing half-Black, or having “tons of” Black friends, doesn’t automatically give you the authority to speak on Black issues. It also only highlights how woefully unprepared some White people are to raise a Black child who is equipped to deal with the realities of being Black in America.

Emphasis on realities. Not our dream. And you only have to look at the racial attacks on President Obama to see the true state of race relations in this country. Sure, we wish there weren’t a need for HBCU’s, but after being locked out of the educational system for 400 years and kept to separate and unequal schools until the 1955 decree implementing Brown vs. Board of Education, the legacy of that inequity still lingers.

I won’t even get started on our access to higher education.

And, Mama Pompeo, we wish we didn’t need the NAACP Awards, ESSENCE Awards, Trumpet, Black Girls Rock, or BET Awards. And even Black people wish we didn’t have the Soul Train Awards (LOL!) But in case you didn’t catch the latest Oscars, Black people aren’t being recognized in the mainstream for their many talents and accomplishments. This is why these shows came into existence in the first place.

For the past three years, I’ve been on a mission through my work at MochaManual.com to tell how different the Black motherhood experience is. Many times I am attacked and accused of being a racist and creating divisions.

It’s an inconvenient truth. And an uncomfortable one.

But the truth of the matter is, our experience is different. What Black children from all walks of life will face in the real world — from the sandbox to the C-suite — is different. Period.

And disregarding that harsh reality is irresponsible parenting. Yes, we hope for change. Yes, we can create our own idealogical, race-neutral bubbles in our own homes and social circles. But eventually our Black children (half or whole) have to live and thrive in the real world.

Ellen Pompeo should stick with playing an angst-ridden, relationship-phobic doctor. I really liked her in that role — at least for the first two seasons.

Because she really sucks at racial commentator.