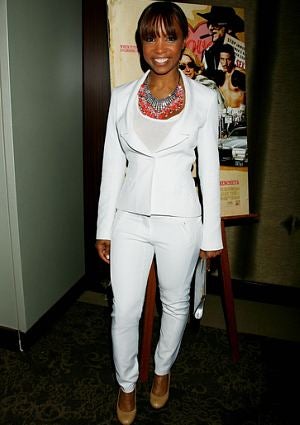 Actress Elise Neal is best known for playing the sweet roles of wife and girlfriend on TV shows like “All of Us” and “The Hughleys.” This month, the Memphis native takes on a sexy girl role in the film “Love Ranch” in which she plays a call girl working in the first legalized brothel in the United States in the 1970s. Neal spoke with ESSENCE.com about taking on a sexier role after years of wanting to be taken seriously, loving her body image and why we might see a fitness DVD in her future. ESSENCE.com: How did you get involved with “Love Ranch?” ELISE NEAL: I had been hearing about “Love Ranch” for a while because of being associated with [director] Taylor Hackford who had just finished “Ray.” I had auditioned for “Ray” and didn’t get the job, but the casting director remembered that [Hackford] and I were very close on that film so she brought me in to audition to play the role of Alana. When it looked like I might get the part, I was like, ‘Wow, this would be really cool.’ I know a lot of Black women would want this role and it’s gonna be kind of fun. ESSENCE.com: This movie is about the first legalized brothel in the United States and you play a call girl named Alana. How did you prepare for the role? NEAL: I got every old-school ’70s magazine and just tried to embrace that period, embrace the culture. Taylor wanted to infuse a little bit of Black power into the storyline because that’s what was going on at that time so I did try to incorporate a little bit of that as well. But Alana is that fun-loving and is enjoying what she’s doing. She’s comfortable with herself and he body. She’s a strong Black woman that just happens to work at a brothel. ESSENCE.com: What was the most fun about playing this role? NEAL: I’ve played a lot of girlfriends and good girls in my career and people always assume that that’s exactly who I am in person. I act so that I don’t have to play myself. I am a lot more fun-loving and carefree than a lot of the characters I play and that’s for a reason. I come from a background of musical theater and music videos so when I first started acting I wanted to be taken seriously and show that I had the chops to do this acting thing. I stayed away from sexy roles or anything body-conscious purposely but at this point in my life — 20 films and four TV shows — I think I’ve let everyone know I’m an actor. ESSENCE.com: You play a Black woman in a brothel in Nevada. How did that work back then? NEAL: I had an interesting conversation with Taylor Hackford about race in the ’70s. You would think that a lot of the men that came to these places would want a lot of variety, but the truth is at that time there was so much going on between the races that even the men who frequented brothels would still go for something that they knew. [Laughs] For me in this movies it was like, ‘Whew, I don’t have to deal with a lot.’ I just got to have fun while the other girls were stressed about sex scenes. ESSENCE.com: You’re also starring in a web series called “My Manny” that airs between sitcoms on TBS. NEAL: Yes, I play a widowed woman who is looking for a nanny and when the caretaker comes to the door he is a handsome striking guy and she’s caught in between being his boss and starting to have feelings for him. I really enjoy doing this because there just aren’t enough stories carried by Black women on national TV. For me, this is an opportunity to have fun and do something different on the web. ESSENCE.com: So I have to say, you’re fabulous at 44. How do you keep it sexy? NEAL: Working out has been in my regimen for most of my life. I started dancing and performing at the age of six and then went to a performing arts high school until I started my journey to Broadway. So to work out for an hour a day is no big deal to me when I used to dance all day doing ballet, tap and whatever else. A lot of people are talking about my body image in “Love Ranch” because it’s being showcased for the first, but honestly, I’ve been in shape for years. You might see a fitness DVD in my future. “Love Ranch” is currently in theaters.
Loading the player...