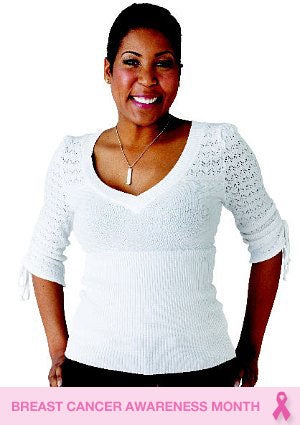 In August of 2007 I had just moved to Dallas to co-host the “Rickey Smiley Morning Show.” Sometime in September I was laying on my couch when I felt a lump the size of a marble on my breast. Something about that lump made me uneasy. There I was thinking, ‘I just got a great job, and my insurance doesn’t kick in for 90 days.’ I called my sister to tell her what I found and that I would wait to check it out because I didn’t want to spend that kind of money. She was like, ‘I’m telling mama.’ Within 30 minutes my mother was on the phone like, ‘Girl, you better get that checked out.’ So I went to the doctor and it was what we thought it was. I had stage 1 breast cancer. I was devastated, but I think I already knew. I had surgery that December and went through four months of chemotherapy. I lost all of my hair. I remember telling my doctor that, no my hair wouldn’t fall out; I had done research and not everyone’s hair fell out. He looked at me with a blank stare, like ‘Ebony, your hair is going to fall out.’  I didn’t immediately tell my job but when I did announce it to my colleagues and to the listeners, I got hundreds of encouraging emails, some from men whose wives had breast cancer. I went through a “woe is me’ phase but it was short-lived because I would look at my sister and parents trying to hold back their tears for my sake. When we talk about breast cancer survivors we should also talk about families of because they are survivors too. I am at a peaceful place now, and the cancer is out of my body. My message to everybody is that breast cancer is not an old people’s disease. I was 35 when I was diagnosed. Sisters, make sure you get your mammograms, even if your insurance cover it. It’s your life, and it’s worth it. ‘I am a breast cancer survivor.’ Ebony Steele, a co-host of the Rickey Smiley Morning show, is one of five Survivor Ambassadors for General Mills’ Pink Together campaign. Join the cause, now.