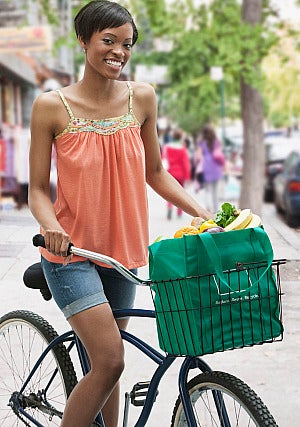 When you wake up in the morning and turn on the light, are you using an eco-friendly CFL bulb? Before you get into the shower, do you run the water for 10 minutes until the water gets extra hot first? When you head off to work, do you drive your car or do you take public transport? When you get your morning coffee, do you bring your own container or do you use a take-away cup? Styrofoam or paper? Launched on April 22, 1970, Earth Day celebrates its 40th Anniversary today. What started out as a grassroots initiative inspired by Wisconsin Senator Gaylord Nelson in 1962 became a nationwide modern environmental awareness movement only eight years later. In 40 years, Earth Day has inspired us to clean up our neighborhoods and cities. Real efforts have been made to reduce the harmful effects car emissions, from increased production of hyrid cars to more bike lanes in major cities. Moreover, “living green” has gone from being an abstract term to a trend to being a commonplace way of life. We are now moving in the right direction. Compared to the 1960’s one might argue that we’re a much more environmentally aware society. Still, there’s so much that we can do on individual levels. I’ll start with me. As I write this, I see four used paper cups on my desk. The sad thing is, I have an environmentally friendly, reusable, aluminum water bottle that I left on my kitchen counter this morning. I pack my lunch in reusable tupperware containers, but often order takeout that I know comes in styrofoam. I try to remember to bring large totes to the supermarket, so I won’t have to use grocery bags, but I often forget to. This Earth Day, let’s take pride in taking care of our planet. Start with the simple things. Related stories: