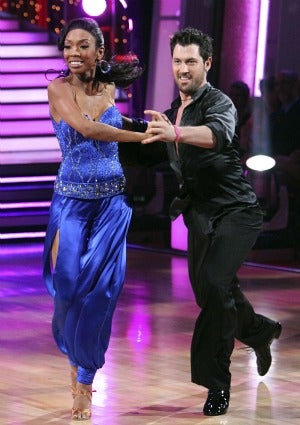 With a few episodes left to go before the show’s finale, Brandy and partner Maksim hold the lead position on “Dancing with the Stars” for the second week in a row. This week she danced the Waltz and Cha Cha Cha, both leaving the judges impressed and flashing high scores of 10. The soon-to-be dancing queen dished with ESSENCE.com about her week on “DWTS,” why she was scared of dancing and why she calls the dance floor her new boyfriend. ESSENCE.com: How was practicing two dances this week, the Cha Cha Cha and Waltz? BRANDY: It was very interesting because with the instant dance, we didn’t have music, so we tried to create a routine that went with any random music that the show would give us, but not the actual music we would dance to. So that was a little bit of a challenge. But musicality is a blessing, because once I got the rhythm of the Cha Cha Cha, I was able to do it to any music we had. But the Waltz was beautiful. I picked it up right away. There was something about the dance and the song that I connected to. That one seemed a little more less challenging than the instant dance routine. ESSENCE.com: Were you nervous about the instant dance? BRANDY: I was nervous about it because we got the music 20 minutes before we had to perform it. We didn’t know which accents we were going to hit, or how we were going to perform it and we didn’t want to end in a weird position. Plus we went last in our last dance, so we didn’t have the amount of time we wanted. It’s a challenging show, but I love a challenge. ESSENCE.com: Is the Waltz your favorite dance you’ve done thus far? BRANDY: I think the Fox Trot is my favorite dance thus far. That and the tango. In the Tango I felt like a superhero or something. The outfit and everything made me come to life, [sings] I’m your hero!! And I got a chance to be a little seductive. I feel like the dance floor is my boyfriend right now. Just being sexy… it just felt good. ESSENCE.com: Dancing requires so much discipline… what have you learned about yourself since you’ve started dancing? BRANDY: Well the main thing I’ve learned is that if I put my mind and focus into something I can do it. Dancing has always been a fear of mine so to be able to do a show and be part of a competition that requires all the dancing that I’m doing it takes a lot of commitment. Then my work ethic has reintroduced itself to me. I’m so thankful because I’m ready to go in other parts of my life personally and in my career and go after everything that I’ve been dreaming about for the past five years. ESSENCE.com: Why were you scared of dancing? BRANDY: Because it’s never been one of my strongest points, it’s never been something I thought I was naturally gifted at. You see people like Janet Jackson or Beyonce and they look effortless when they dance. When I danced it always looked like I was trying hard to keep up. It was a just a mess! [laughs] Right before I signed up to do “DWTS” I told my daughter and she said, “Why Momma, you can’t dance.” Then I said, ‘That’s why I’m going to do it, to prove to you I can do more than sing!’ [laughs] ESSENCE.com: When you saw that you received 29 out 30 this week, what went through your mind? BRANDY: Did you see me act ghetto and do that fall to the floor? [laughs] That’s how I felt! I was so excited and over-dramatic like I always am, but it just felt dope! It felt refreshing. Like when you work so hard and it translates on the dance floor and the judges see the work and the progress and they reward you for that, it make you feel like ‘OMG!’ Never in a million years would I think I would get a 10 from Len, then the next 10 the week after that. Then Bruno brought his 10 and I’m looking for that 10 from Carrie Ann. A 10 from her at this point… I’d probably faint.