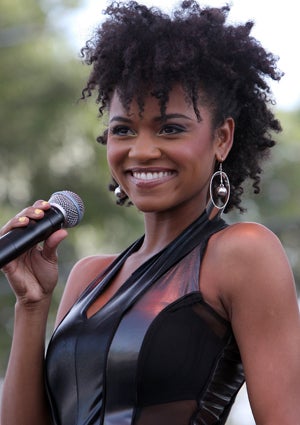 “And I’m Telling You I’m Not Going,” the anthem made famous by Jennifer Holiday and Jennifer Hudson has become synonymous with Amateur Night at the Apollo. Now, fans of the 1981 Broadway musical and its 2006 adaptation can hear that powerhouse ballad delivered by newcomer Moya Angela, when ‘Dreamgirls’ launches its national tour at the famed Apollo Theater on November 22, 2009. Syesha Mercado, memorable as the second runner-up on ‘American Idol’s’ battle between David and David last year, portrays Deena Jones, the role portrayed by Beyonce Knowles in the film and that gave a boost to Sheryl Lee Ralph’s career in the original stage production. ‘Dreamgirls’ will play at the Apollo, which is celebrating its 75th year, through December 6. Visit Dream Girls On Stage to see when the show is coming to your town.