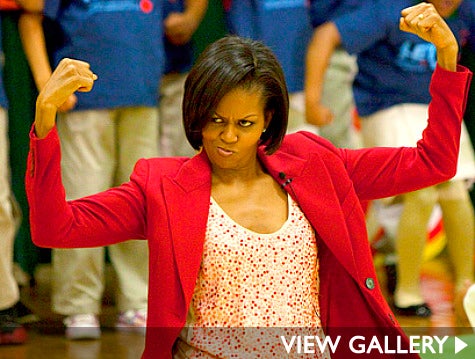 It’s been three months since First Lady Michelle Obama officially launched her “Let’s Move!” campaign, which targets the problem of childhood obesity. In that time, she’s spearheaded a number of activities in her mission to find the best solutions. She kicked it on a soccer field with children at a D.C. youth sports clinic, visited a Philadelphia supermarket boasting quality fresh foods in a low-income community, and hosted 2010 Olympians (including speed skater Shani Davis) and Paralympians at the White House. On Tuesday, Mrs. Obama unveiled the findings of the Childhood Obesity Task Force report, the result of 90 days’ work with senior officials in her husband’s administration, along with other experts in the public and private sector. Based on carefully researched and brainstormed recommendations for a government action plan to solve the problem, the report has been delivered to the President. Just before the report’s release, ESSENCE.com talked with nutritionist and author Dr. Rovenia Brock, better known as “Dr. Ro” from the BET health program “Heart & Soul,” and we asked about some of the ideas brewing from the First Lady’s operation. Fiercely committed to helping Americans lead healthier lives, especially Black women who have an overweight/obesity rate of 69 percent, Dr. Ro spoke candidly on what it will take to move the needle on childhood obesity, why Home Economics should be reinstated in schools, and what the federal government is getting wrong. ESSENCE.com: You’ve been an advocate for nutrition and fitness, long before Mrs. Obama launched the “Let’s Move!” campaign. Why are you so passionate about this? DR. RO: I lost my mother to metastatic stomach cancer when I was nine years old. My mother was an overweight woman. She was a southern girl from a small town in Virginia whose eating habits were atrocious. She came from a time when pigs feet, chitlins, fried chicken and collard greens cooked with fatback was the rule of the day. In my whole family, that’s pretty much how people ate, and there was obesity, heart disease, hypertension, and a lot of other infirmity related to lifestyle. I first became interested in wanting to help my community when I was about seven. ESSENCE.com: One idea that came from a White House meeting on childhood obesity last month was working with local governments to plan safe routes to playgrounds and parks, and creating walkways and bikeways in communities without these resources. Your thoughts? DR. RO: I’m all for having safe routes to playgrounds and parks, but it seems more essential that physical education be put back into all schools, K through 12, and taken seriously. Schools are where you have a captive audience, and the fact that PE has been taken out of so many of them is the big elephant in the room. Nutrition and fitness should also be part of the curriculum in other classes. They took away Home Ec, and basically nobody has since given subjects like food preparation and living well a thought. Somehow the American public seems clueless as to how to make a happy and healthy home anymore, and the sad part is, it’s easier than most people think. ESSENCE.com: Another component of Michelle Obama’s campaign is providing parents and other caregivers clear, consistent information about building a healthy life for their kids. What do you think is the best source for such information? DR. RO: Right now there are so many mixed messages, and some of them come from the federal government. How can you be the same entity that subsidizes corn, that’s responsible for high fructose corn syrup being put in practically everything in the food supply, yet also talk about eating vegetables and whole grains? It wasn’t until the last rendition of the USDA food pyramid that it even started to make sense. Before it was, “Have lots of bread, then, as you go up, have fruits and vegetables, meat and dairy, and use salt and oils sparingly.” What is “sparingly?” And what kinds of fats and oils are they referring to? When the First Lady talks about clear and concise messages, that’s what I understand it to mean. She knows, just as I do, that there are mixed messages coming from the federal government. ESSENCE.com: Do you feel optimistic about the First Lady’s campaign starting a movement in this country? DR. RO: It’s going to take a collective effort — of principals being willing to make changes in their schools for the well-being of their students, to legislators and parents, and everyone working together. People need to get serious and stop political posturing on this issue. She can’t do it alone. I think that this is one of the most substantive campaigns I’ve seen from a First Lady ever, and she’s trying to really make a difference. I also understand that the difference she hopes to make must be made on a grand scale, with all of our participation. For more Cynthia Gordy Obama Watch stories, click here. Dr. Ro is a nutrition coach, author of Dr. Ro’s Ten Secrets To Livin’ Healthy (Bantam) and creator/executive Producer of “Dr. Ro’s Fit Kidz” — a DVD series to teach kids 2-5 and 7-11 how to live healthy lives through food, fun and fitness.