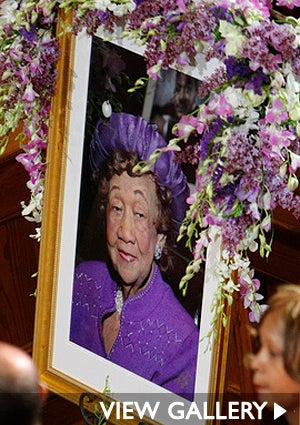 The death of Dorothy Height at age 98 came as a surprise. Dr. Height was a ubiquitous presence in Washington and, it seemed, no matter where you went, you were likely to encounter her. Though frail and confined to a wheelchair, there she was at the Obama inauguration and Christmas party and at countless events around the city.  The last time I saw her was in February at the White House, when the President signed his executive order creating his Board of Advisors on Historically Black Colleges and Universities (HBCUs). I didn’t get a chance to speak to her then, and I shall always regret that. I suppose the death of anyone at age 98 can’t really be a surprise, even if that person is the seemingly indefatigable Dorothy Height–a woman who, since the 1930s had been an active and visible presence in civil rights and women’s rights in the United States. The more dramatic surprise for me, the revelation, as it were, about her, came in the obituaries and in the public eulogies given by some of the women who knew her, because in them I learned so much more about Dorothy Height, and I saw more than before what a truly remarkable woman she was. In the obituaries in the Washington Post (on the front page above the fold) and in the New York Times, I learned about Dr. Height’s early years when she won a high-school oratorical contest and was awarded a college scholarship that she took to Barnard College in New York City.  I learned that she was admitted on her merits but turned away because Barnard had a quota for Black students, and it had already admitted its two Black freshmen for the year. Fast forward to 1963 and the March on Washington, and I learned that even though she had been a leader in organizing the march, she was not asked to speak because she was a woman. I learned that she was always at the table with the great men associated with the civil rights movement, but she was never given the recognition for her leadership and the important work that she did. From the eulogies of two of the women I admire most in this world–Children’s Defense Fund founder and civil rights veteran Marian Wright Edelman, and former Secretary of Labor Alexis Herman–I learned that Dorothy Height had been a mentor, a role model, a wise counselor and an inspiration.  She had been a pioneer who showed them the way, and a guide who helped them make their way.  She had been a “shero,” as former Spelman and Bennett College for Women president Johnnetta Cole would term her.  For decades, she had been a powerful force in the lives of these women and countless others. Some of those women were global celebrities like Oprah Winfrey, who paid off the mortgage on the Pennsylvania Avenue headquarters building of Dr. Height’s beloved National Council of Negro Women. Others were women less known but still inspired by her life and work, like the thousands who are paying their respects at the services being held for her in Washington, DC, and across the country. I met Dorothy Height in 1986, when I was chairman of the Fulton County Board of Commissioners, an elective office I held in Atlanta from 1978 to 1993. Dr. Height appeared before the board, seeking financial support for the Black Family Reunion Celebration that the National Council of Negro Women was bringing to Atlanta and other cities around the country to focus attention on and give support to our families in the knowledge that they are foundation stones for healthy children, adults and communities. I met Dr. Height in 1986, and she graciously reminded me that she knew my paternal grandmother, a 1907 alumna of Fisk University who later joined Delta Sigma Theta, the sorority Dorothy Height led before taking the helm of the National Council.  And, she knew my journalist mother, who owned her own weekly newspaper in Los Angeles from 1940 to 1960. Dr. Height knew my family, always asked to be remembered to my 94-year-old mother, and she was always gracious and warm to me. I knew Dorothy Height, but I didn’t fully appreciate her. It is only in her death that I think I begin fully to appreciate Dr. Height.  I see, first, the breadth of her experience: from America in the first decade of the 20th century to the first decade of the 21st century. I see Dorothy Height from the high-school oratorical contest to the great March on Washington to the inaugural stage with President Barack Obama. I see a woman of grace, dignity, power, persistence, principle, and longevity. I see a woman who carved out a leadership role for herself in the great movements for civil rights and women’s rights in America. I see a woman who made her own way and also helped countless other women make their ways on the paths of leadership and service they chose. I see a Woman for All Seasons, who made our nation a better place.  I see her and I appreciate her more than I had before, and I am honored that I had the chance to meet her on her journey.  What a remarkable woman she was. For more “Moorehouse Man” stories by Dr. Michale Lomax, click here.