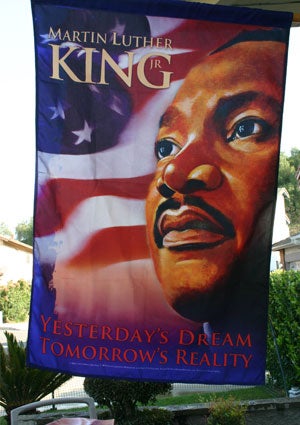 In the year 2000, Maria and Dwayne Ross were living the American Dream. Both graduated from college with “well-to-do” degrees. They had two beautiful children. The only thing left to do was purchase a home. And so they did. The couple moved to an upscale neighborhood in Katy, Texas.

It is the morning of Juneteenth, the oldest nationally celebrated commemoration of ending  slavery in the United States. A happy Maria woke up with a great feeling of pride. She walked to her front door and, to her surprise, found a burning seven foot cross laying on her yard.
“I never thought in my wildest dreams that I would wake up to something like that,” she says. “It was truly devastating.”

Maria had an epiphany that day: the United States flag but with a twist. The twist? Celebrating Dr. Martin Luther King, Jr., on a flag.

ESSENCE.com spoke to Maria, the founder of Ross Flags, based in California and Texas, about deciding to put Dr. Martin Luther King, Jr., on a flag. What other historical figures did she have in mind, and why she, along with Congresswoman Sheila Jackson Lee, are so focused on sharing this flag across the country.

ESSENCE.com: What inspired you to think about putting Dr. King on a flag?
MARIA ROSS: After being victims of a hate crime, my family turned to the inspiration of Dr. King to help get beyond our grief.  We decided we needed to do something to address the bigotry and ignorance which continue to plague our communities today.  We decided a visual display in the form of a flag could be a great symbol to help remind us of the selfless dedication Dr. King devoted to his life.

ESSENCE.com: You are also working closely with Congresswoman Sheila Jackson Lee in Houston, Texas, on trying to get the flag flown in schools. You have been successful in some schools, but why is this so important to you?
ROSS: The flag acts as a constant visual reminder of the sacrifices Dr. King and others made during the Civil Rights movement. One of the problems we’ve noticed among young people is the lack of appreciation for the opportunities they enjoy today. The flag helps stimulate dialogue, which is the basis for learning. Educators are given the gateway to delve into the history of the Civil Rights movement by focusing on Dr. King’s contributions to society.

ESSENCE.com: Are you considering placing any other Black historical figures on flags?
ROSS: We are currently working on being licensed for other leaders. We are trying to become a flag company with a purpose. We would like to contribute positively to society by creating symbols of awareness and showing respect and honor to those that have brought constructive change to our world.

ESSENCE.com: In celebration of Dr. King’s legacy, what is the first aphorism that you remember the most from him?
ROSS: The most impressionable words were, “The day we are not judged by the color of our skin but by the content of our character.”  Dr. King was willing to die for many causes but all wrongs he sought to right were based on the biases brought on by racism. This is exactly what brought my family the grief we suffered 32 years after Dr. King’s death.