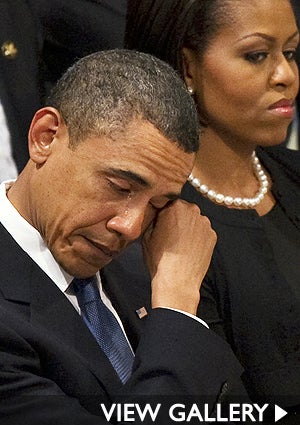 Flags at the White House, military posts and naval stations around the world, are flying at half-staff today–under the order of President Barack Obama–out of “respect for the memory of Dorothy Height.” This morning, still more tributes were paid to the “godmother of the Civil Rights Movement,” who died last week at the age of 98, during her funeral service at the Washington National Cathedral. In thanksgiving and celebration of Dr. Height’s remarkable life, thousands of attendees filled the cavernous sanctuary, including President Barack Obama and First Lady Michelle Obama, Cabinet members, senior administration officials, and countless members of the U.S. Congress. Actress Cicely Tyson, Republican National Committee Chairman Michael Steele, the Reverend Jesse Jackson, and Maya Angelou, who read scripture from Psalm 139 during the service, were also among the notable guests. Although Height lived a full life–as a tireless advocate for social justice who worked on every major civil rights advancement for women and people of color dating back to the 1930s, as the president of the National Council of Negro Women for four decades, and an advisor to every U.S. President since Franklin Roosevelt, among other critical roles–her death came as a blow to the Washington, D.C. community in which she remained active until her final weeks. President Obama wiped tears from his face as singer Bebe Winans sang “We Are Climbing Jacob’s Ladder,” one of Height’s favorite songs, and former U.S. Secretary of Labor Alexis Herman’s voice trembled as she fought back tears during her remarks on her friendship with Height. “She taught us lessons in her transition that, in the same essence, she had been teaching us all of her life,” said Herman. “To keep fighting, and to never take yourself out of the game.” The ceremony, however, wasn’t without its humorous moments. Dr. Camille Cosby reflected on Height’s laughter and straightforward personality. “She had an interesting way of releasing a person from her personal space,” said Cosby. “She once told someone, ‘You will not be moving into the future with me.'” President Obama also paid tribute to Dr. Height, who he called a “regular” at 1600 Pennsylvania Avenue. “She came by not once, not twice–21 times she stopped by the White House,” he said to laughter and applause, adding that she participated in discussions around health care reform in her final months. Reflecting on her contributions to the United States, fighting for opening doors to opportunity amid lynchings and Jim Crow, the President said that she deserves a place in history books and America’s memory. “And yet, one of the ironies is, is that year after year, decade in, decade out, Dr. Height went about her work quietly, without fanfare, without self-promotion,” Obama continued. “She wasn’t interested in credit. What she cared about was the cause. The cause of justice. The cause of equality. The cause of opportunity. Freedom’s cause.” The President ended his 13-minute eulogy by encouraging Americans to honor Height’s memory by likewise serving their country. “We can all be drum majors for a righteous cause,” he said. “Let us honor her life by changing this country for the better as long as we are blessed to live.”
Loading the player...