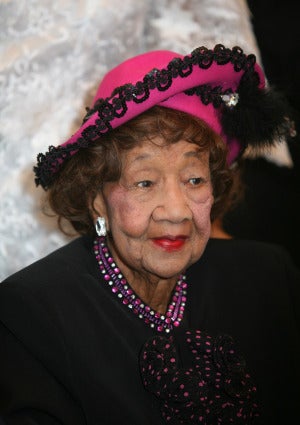 Civil rights icon Dorothy Height died this morning at Howard University Hospital. No reports on the cause of her death have been released. She was 98. The passionate activist was on the podium when Dr. Martin Luther King, Jr., delivered his  “I Have a Dream,” speech at the March on Washington in 1963. Height was the president of the National Council of Negro Women (NCNW) in 1957 until 1997. She still remained chairman of the organization. Born in Richmond, Virginia, Dr. Height earned a Bachelor’s and Master’s Degree from New York University and did post-graduate work at Columbia University and New York School of Social Work. In 1994, President Bill Clinton presented her with the Presidential Medal of Freedom award. This morning, President Barack Obama released a statement, in which he called Height “the godmother of the Civil Rights Movement and a hero to so many Americans.” President Barack Obama’s official statement: “Michelle and I were deeply saddened to hear about the passing of Dorothy Height–the godmother of the Civil Rights Movement and a hero to so many Americans. Ever since she was denied entrance to college because the incoming class had already met its quota of two African American women, Dr. Height devoted her life to those struggling for equality. She led the National Council of Negro Women for 40 years, and served as the only woman at the highest level of the Civil Rights Movement–witnessing every march and milestone along the way. And even in the final weeks of her life–a time when anyone else would have enjoyed their well-earned rest–Dr. Height continued her fight to make our nation a more open and inclusive place for people of every race, gender, background and faith. “Michelle and I offer our condolences to all those who knew and loved Dr. Height–and all those whose lives she touched.” Leave your condolences below in our Comments section.
Loading the player...