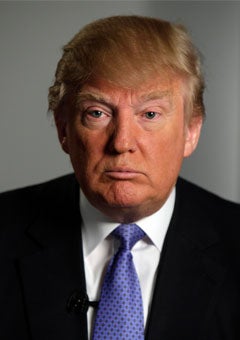 Donald Trump is allegedly running for President. I say “allegedly,” because despite his insistence that he is serious about going for the role of the leader of our gloriously unfair land, I (and many others) am convinced his intent is a glorified PR campaign to promote his best product: himself. And I get why he’s doing it.

After the too ridiculous, too nearly successful attempt by Sarah Palin to become VP in 2008, it now seems like anyone has a viable chance at the top spot, or at least getting a heartbeat away from the position.

Palin’s celebrity quadrupled her net worth, jumping from $250K (in 2007) to $1.2 million (in 2008), according to the Wall Street Journal. These days? $12 million. Trump, the face of the American businessman, is undoubtedly borrowing a page from the Palin Playbook, trying to flip his single digit billions into double that.

But it’s the way he’s going about it that has so many Black Twitter timelines in a rage. First, it was Trump’s extolling of his great relationship with us, “The Blacks,” like we’re an English rock band or a new sitcom family. Then he resurrected the dying “birther,” campaign, the ridiculous idea that President Obama isn’t an American-born citizen. This, despite the White House releasing Obama’s Certificate of Live Birth in 2008. (In case anyone other than Trump is still worried, the White House just released the long form of the President’s birth certificate to the public. )

Trump followed his inquiry about President Obama’s grades with a trite anecdote: “I have friends who have smart sons with great marks, great boards, great everything and they can’t get into Harvard.” Yeah. Please add that to the list of things that are not our President’s problem. But the undercurrent of Trump’s remarks are what I have a problem with. They carry the sentiment of the lingering argument against affirmative action, the one that goes “a qualified White male somehow missed his birthright because an undeserving, under-educated Black person stole it.”

Of course, Trump will deny that accusation. Just like a California mayor did in 2009 when he forwarded an email that included a picture of the White House with a watermelon patch on the Great Lawn. He claimed an unawareness of the racial stereotype that Black people like watermelon. Okay. And just like an elected member of the Orange County Republican party did this year, when she forwarded an image depicting a family of chimpanzees with Obama as their son. The caption read, “Now you know why no birth certificate.” When the story hit the press, she feigned ignorance of the racist implications with, “I simply found it amusing.” Whatever.

All this habitual line-stepping (and crossing) is at the root of what makes me blank stare at the screen whenever I read about Trump’s recent interviews. I prefer my racism served straight up. Don’t hide behind poorly-made references to a group of people, questions of whether Obama is a real American, and wondering how “this guy” (how Trump dismissively referred to President Obama in his AP interview) succeeded when the odds weren’t stacked with nepotism and wealth in his favor. Treat it like Spades. Don’t hold your cut cards. Just say, “I have a problem with having a Black leader.” This way, everyone is spared the condescending explanation, “That’s offensive? I had no idea…” when they get called on their bull and the Blacks can get through band rehearsal or commercial interruption without wondering if we’re being too sensitive (we’re not). Maybe without all the distracting accusations and second-guessing, America can finally deal with race and racism, 400 years after the problem started.


Demetria L. Lucas is the Relationships Editor at Essence Magazine and the author of A Belle in Brooklyn: Your Go-to Girl for Advice on Living Your Best Single Life (Atria). Pre-order her book on Amazon.com