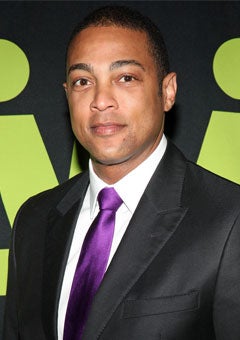 And I say that with no sarcasm or malice. I think as a Black woman, I’m expected to get ticked when a successful, attractive Black man comes “out.” At least, Lemon seemed to think so, describing to the New York Times why some Black men would rather keep their sexuality to themselves instead of facing our, i.e., Black women’s, vitriol.

“You’re afraid that Black women will say the same things they do about how Black men should be dating Black women.”

Of course, Lemon is referring to the way some of us tend to go off at the idea of “our” men (but only the successful and attractive ones. You’ll note there has been a marked difference in the way folk responded to Khloe and Lamar versus Reggie and Kim) dating a Kardashian or Amber Rose (is she Black? I actually think she is). Anyway, he’s right — some of us will. But I think the rest of us are just so happy that there’s one less man on the over-hyped down low (not that Lemon was. He’s been very clear that his friends and colleagues knew he was gay. It’s us who are just finding out, or for some, getting confirmation) that we’re practically ushering Lemon out of the closet and into the forefront, despite his unwillingness to be a Black gay role model.  (Lemon told Loop 21: “I’m not saying I wouldn’t become an activist for the LGBT community or that’s not a part of my future but right now I don’t see that.”)

Frankly, I’m neither shocked, surprised, or angry by his revelation (sorry to let you down, Don.) I’ve always thought Don was a cutie (I’ve interviewed him, great phone voice too), but I’ve never really pondered his sexuality one way or another. The big “aha!” for me in his admission is his age. Don Lemon’s forty-friggin’-five? I had him pegged at early 30s. If there’s a chapter in “Transparent” about living healthy, and keeping the Black uncracked, I will get up from my laptop, leave this essay unfinished, and run to the store right now! Forty-five and looking like that? Really, D?

Anyway. On his media tour, Lemon brings up some interesting, and valid, critiques on Black folk and homophobia. “[Being a gay man] It’s about the worst thing you can be in Black culture,” he told the Times. “You’re taught you have to be a man; you have to be masculine. In the Black community they think you can pray the gay away.”

I want to deny this and pretend it doesn’t exist so that Black people can look better in the national spotlight, but um… isn’t it way too true? We are, of course, not the only homophobes (in general, not all of us), but pointing the finger to say, “Well, White people do it too!” doesn’t make our issues any less problematic. We, the Black people, do have some serious hang-ups with Black gay men. And whether it’s because of the church, or patriarchy or just plain ol’ ignorance and fear of the unknown, our refusal to just let folks be who they are is stifling and alienating. Don isn’t the first to call Black people on it, but wouldn’t it be nice if we somehow became more tolerant so he could be the last?

Demetria Lucas is the Relationships Editor at Essence Magazine and the author of A Belle in Brooklyn: Your Go-to Girl for Advice on Living Your Best Single Life (Atria). Follow her on Twitter at @abelleinbk