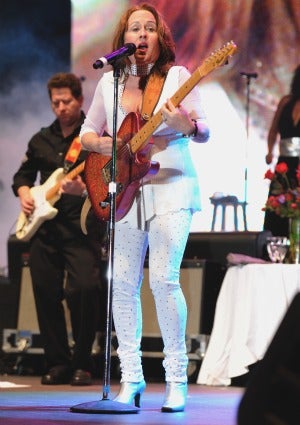 I hope everyone had a wonderful Christmas/holiday season. I know I did. Although I enjoy the holidays, it always seems as if the Christmas joy is quickly overshadowed by some tragic event. From the 2004 Tsumani that killed over 200,000 people, to James Brown’s death on Christmas Day two years later, to Eartha Kitt’s death two years after that, I’ve sadly become accustomed to some bit of news that will send a shock through my system. This year’s Christmas afterglow was suddenly dimmed by the tragic news of Teena Marie’s unexpected death on December 26. As far as her fans knew, at the time of her passing, Teena wasn’t sick, and as recently as the day of her death, her website featured upcoming tour dates; one was even scheduled for this week in Atlanta. When I turned to the internet they didn’t have much information, but focused on what was known; that she was a White performer. But Teena Marie was so much more than that. To focus solely on her race, or simply describing her as a White performer who sounded “Black” (whatever that means) is marginalizing her incredible legacy. I, like most of her fans, have been listening to Teena Marie since her debut. I loved her music, and could feel her passion, her soul and her spirit on every song. Whether it was a party or unrequited love, Teena had a song that we could relate to. From my partying in my head to “Square Biz” while running on the treadmill reliving my college days to blasting “Portuguese Love” while unpacking my suitcase in Lisbon, Lady T seemed to have a song for my every moment. Fans of R&B music appreciated her music and the fact that this chanteuse was White did not matter one bit to me or her true fans. What did matter is that she could “sang” and that she could pen incredible lyrics that appealed to R&B fans. According to the Associated Press, Berry Gordy did not feature Teena’s face on her debut album “Wild and Peaceful” in 1979 for fear that she would not be embraced by the Black community. But after her debut hit “I’m a Sucker for Your Love” charted and she appeared with Rick James on Soul Train to perform her hit, the Black audience didn’t care what color she was. Lady T was a self described “Black artist with White skin,” but she wasn’t merely a crossover artist. Teena Marie was songstress who stayed true to her musical talents. She was a gifted singer, producer, guitar player, keyboardist, percussionist, arranger and often co-produced many of her songs. You name it, as far as musical abilities were concerned, she possessed it. I’m not saying that her race doesn’t matter, because we all knew she was White. What I am saying is, who cares? Good music is good music, and talent is talent. Race may matter in the real world, but race has always gotten a pass where good music is concerned. The same Whites that wouldn’t let their kids play with Black kids during the Jim Crow era were enraptured by Ella’s soulful voice, or sat in amazement and appreciation as they watched Sammy tap dance and belt out tunes with the Rat Pack. As long as there is a genuine musical talent, audiences really don’t care, proving that music has always been colorblind. And before you say she gave street cred to other White soulful artists, and paved the way for a Justin Timberlake, again I say, see above. If you really insist on pushing that point, in this multi-culti, autotune era when audiences are clamoring for good music, do you really care that Justin is white? Not really, again, what matters, as always, is the musical gift. A true artist will always be inspired by the musical geniuses before them, and Teena was no different. What matters is that we have lost a great musical icon in the R&B industry, not that she was White, or grew up around Black folks or was inspired in her “blackness” at a young age by her godmother. My ear doesn’t care. I do care that I will never get to see her in concert again. The next time I hear her song on my playlist; I won’t remember that she was White, I will remember her talent, and will shake my head because another musical genius is gone too soon.