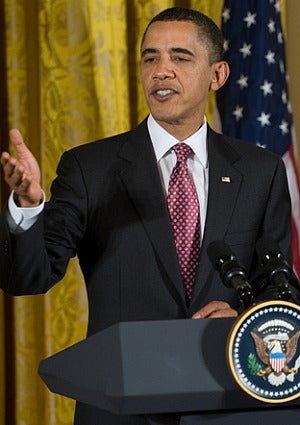 A strong divide between Black Americans is surfacing. A line is being drawn that separates those who feel President Obama is doing all that he can given the state of the U.S. economy, and those who think that he ought to be taking more definitive action in favor of the African American community–hit disproportionately hard with the Great Recession. A leader of the latter group, outspoken author, radio host and Obama critic, Tavis Smiley, is assembling some of the top Black leaders–Jesse Jackson, Louis Farrakhan and Cornel West–for a nationally televised panel discussion at Chicago State University, NYTimes reports. “We Count: The Black Agenda Is the American Agenda,” airs on Saturday on C-Span and will discuss how to mobilize Black leaders to push for an agenda that benefits Black America (i.e. a plan that will combat poverty, poor education, infant morality and the crushing unemployment rate). As more houses go into foreclosure and more jobs are lost, many African Americans feel let down by the President. The NYTimes article mentions a feeling of “unrequited love,”–after enthusiastically rallying behind Barack Obama and going out in droves to vote him into office, the least he could do is look out for us, right? Bamani Obadele, a Roseland youth program coordinator who worked with the President when he was a community organizer, told NYTimes, “He absolutely understands the struggle of Black folks, but he’s not the same Barack I knew. The Barack I knew wouldn’t bail out the banks and let the people go hungry.” Other Black leaders, like Rev. Al Sharpton, have recently spoken out in defense of Obama–stating that the President simply can’t push an African American agenda without losing ground on initiatives that could benefit the Black community in the long run. However, as bank execs cash in their bonuses and Blacks collect unemployment checks, do you feel a little slighted by the President? What side are you on? Read More: