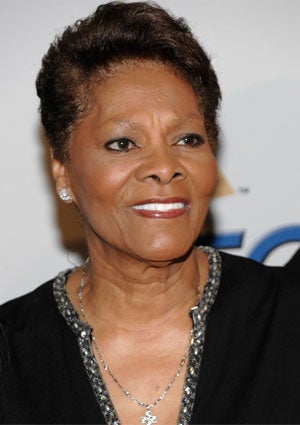 Fifty years ago a young lady from East Orange, NJ named Dionne Warwick began her career as a singer by recording demo records. Within months “The Demo Queen,” as she became known, earned her first Top 40 hit “Don’t Make Me Over” and the hits kept coming.

Today at 70, the five-time Grammy Award-winner is celebrating her golden anniversary in showbusiness by releasing a new CD, “Only Trust Your Heart.” The project predominately features the songs of American composer Sammy Cahn.

In addition to making new music, Warwick recently wrote her memoirs “My Life As I See It” and tried her luck on “Celebrity Apprentice.” Unfortunately, she was kicked off of the hit reality series last night but with all of her projects on the horizon, we’re sure to see more of Warwick soon.

ESSENCE.com: What made you want to do this album?
DIONNE WARWICK: It was brought to me. It was a project that was very reminiscent of one that I enjoyed doing so very much and that was of Cole Porter’s music in 1990. There are some wonderful lyrics and incredible melodies. The record company that I’m with happens to own the catalog. They were looking for a voice to do Sammy Cahn’s catalog and I guess my voice suited the pattern.

ESSENCE.com: The title is so intriguing: “Only Trust Your Heart.” How have you learned to trust your heart?
WARWICK: By continuing to be me. The only me I know. That’s simply put, but absolutely meant. The person you meet here today — you’ll see me a year later and it will be the same person.

ESSENCE.com: In addition to the new CD, you are appearing on “Celebrity Apprentice.” Did you know that because the show has become so popular Donald Trump said they now have to qualify all the individuals who want to be on it? Why do you think he selected you?
WARWICK: I’ve played his casinos. Donald is a very interesting person, has always been. He’s always treated me with the utmost respect. I would go so far to say he is a friend. I didn’t know anything about qualifications.

ESSENCE.com: You had your first hit in 1962 with “Don’t Make Me Over.” Then in 1968 you earned your first Grammy for “Do You Know the Way to San Jose?” When did you finally feel like you had made it?
WARWICK: I’m still trying to make it, child. Just like the pendulum swings one way, it swings the other way too. It’s like the old saying: You meet the same people coming down as you do going up. I’ve been truly blessed that my career has lasted as long as it has. Fifty years is a long time.

ESSENCE.com: Do you think you’ll ever retire?
WARWICK: Yes. Absolutely. Absolutely! When I feel like I’ve finished doing everything that I want to do, I’ll retire, and it may be coming sooner than most people think.

“Only Trust Your Heart” is available everywhere.