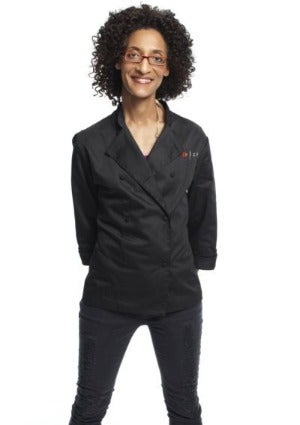 “If you’re not in a good mood, the only thing you should make is a reservation.”
—Top Chef Carla Hall

Flipping through channels a few years ago I came across a program on Bravo called “Top Chef.” The premise of the show was simple: ten contestants, each vying for the very important distinction of being crowned “Top Chef,” competing in different challenges based upon skill, culinary knowledge and creativity.

Being the foodie that I am, I was immediately drawn to the show, soaking up all the techniques, personalities, and most importantly, the antics of all the contestants.

I was hooked but the show seemed to lack something that I could not put my finger on. Fast forward to Season 5: the show is widely successful and this new class was a little bit different, a little more confident, and a little more innovative. Though all were brilliant, there was one particular contestant that stood out, and that was Carla Hall. Tall, quirky, smart, quick, funny, polite, down-to-earth and a sister-girlfriend, she bears a strong resemblance to actress Tracee Ellis Ross, loves her colorful glasses, has a head full of wild hair and we cannot get enough of her.

A former model, who discovered her love for food while walking the runways of Paris and Milan, Carla started off lukewarm in the competition but by the middle of the season she had cranked up the heat and that’s when the everyone took note of her unusual cooking style. Combining her Southern background with classic French training (having trained at L’Academie de Cuisine) resulted in flavorful organic and healthy cuisines and changed the way we viewed vegetarian dishes.

Guest judges Jacques Pepin said “he could die happy” after eating her fresh peas while Emeril Lagasse fell in love with her Crayfish Gumbo. Unlike the other chefs, Carla uses a method known as “cooking with love,” which simply is that the love you have in life determines how much love will go into your dish. Knowing that technique is great, she is always armed and ready to fight her key essential ingredients: European butter, olive oil, heavy cream, Couverture and chocolate.

Though she failed to win Season 5, Carla placed in the top three and marked her place as a force to be reckoned with — so much that she is currently on “Top Chef Masters.” A fan favorite, Carla is kicking butt left and right with dish after dish after dish, snatching up prizes (to date she has won four exotic trips) and showing everyone that being true to yourself makes you a winner regardless if you don’t take home the top prize. Plus, she’s a fan of pies — and who doesn’t love a woman who makes pies?!

When she isn’t busy with her reality television career, Carla is the owner and Executive Chef of Alchemy Caterers in Washington, DC. Armed with a degree in Accounting from Howard University, Carla once worked as a Sous Chef at the Henley Park Hotel and as Executive Chef at both The State Plaza Hotel as well at The Washington Club, and she teaches at various venues around the D.C. area.

Essence.com salutes “our” Top Chef, Carla Hall, with a huge HOOTIE HOO and wishes her all the best in her “Top Chef” journey. Her devotion to cooking healthy has made us proud and has inspired a new movement in the way we view food. Take a look below at some of Carla’s greatest moments on TV.