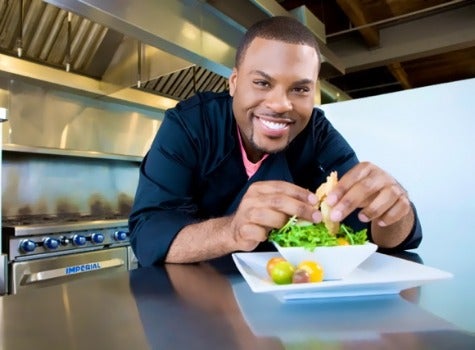 Chef Judson T. Allen knows a thing or two about living a healthy lifestyle. Always struggling with his weight and then gaining more than 70 pounds while attending the University of Illinois at Urbana-Champaign, this Chicago native decided to adopt a healthy mindset to be able to adapt to a fast-paced lifestyle. Even though he had obtained a Bachelors of Science in Food Science and Human Nutrition, there was still work to be done. After graduation, a two-year weight lost journey led to him shedding over 100 pounds and created Healthy Infused Cuisine, LLC in 2007, which offers healthy upscale/gourmet cuisine through meal delivery, personal chef, and cuisine services. His mission: to transform the way people think and feel about healthy cuisine.

Having the opportunity to work with such celebrities as  NFL Player Donovan McNabb, radio personalities Doug Banks and Deed McGuire, The United Negro College Fund, Space Stage Movie Studios, Bain and Company and many more organizations in and around the Chicago area has opened doors that would have never been opened and it has only gotten better.   In addition, Chef Judson Todd Allen has auditioned for shows such as FOX TV’s Master Chef and The Food Networks 24 Hour Restaurant Battle. He was named a semi-finalist for the Food Network’s hit show, “The Next Food Network Star Season 6,” Oprah Winfrey’s Network Show Competition “Your OWN Show” and Fox Television’s “Hells Kitchen.” Most recently, Chef Judson Todd Allen debuted his own live cooking show platform at Kenmore Live Studios in Chicago, Illinois, which is only the beginning for what is to become a healthy and fruitful movement.

ESSENCE.com: What are the elements to an amazing meal?
JUDSON T. ALLEN: The most important elements to any good meal starts with love and passion; those two elements set the tone for how great your meal will turn out.

ESSENCE.com: What are the core ingredients that every person needs in their kitchen?
ALLEN: Everyone should have the basics which are dried beans, rice, canned meat, flour, sugar, eggs and any type of dried seasoning. For me it’s about having those ingredients around that are filling yet flavorful.  Those ingredients are garlic, a nice cheese (blue or sharp cheddar), good olive oil, rice, sea salt and some sort of a fish (either fresh or a canned like anchovy or sardines).

ESSENCE.com: What are the keys to eating and living healthy?
ALLEN: First we must eliminate all fad and trend diets! In 2011, we need to enter the New Year preparing to adopt a healthy, lifestyle change and not become so consumed with counting calories.  But keep in mind to feed your stomach as well as your eyes. Making healthy, nutritious meals must please not only your palette but all your senses. For me I don’t want to live my entire life eating carrots because I am a bonafide foodie! It is a process but one can and will learn to appreciate organic and locally grown produce. Adapting and adopting a healthy lifestyle does not happen overnight so please don’t expect immediate results.

Don’t be afraid to think outside the box when switching from a predominately fat laden and fast food diet to one that is healthy.

A few examples of how to make the switch without diluting the flavors:

1. Instead of pasta, try spaghetti squash. In theory it’s relatively the same texture and it’s much more filling. Add a splash of olive oil, white wine and lime juice and you’ve just created a new and light alternative to ‘neo-scampi.’

2. Instead of portabella mushroom, try oyster or shitake for a more intense flavor.

3. Use coconut milk in shakes instead of regular milk.

4. Use star fruit to infused and lock in a tropical hint to any salad.

4. Use papaya juice as an alternative to store bought marinades.

5. Instead of Salmon and Sole, try heartier, flavorful fish such as Mahi Mahi, Swordfish and
Chilean Sea Bass.

6. Grasp the concept of stuffing food to enhance a much richer flavor.  A prime example is a nice cut of fresh salmon stuffed with spinach, goat cheese and slivers of garlic.

ESSENCE.com: What constitutes “soul food?”
ALLEN: Originally the term derived because our ancestors did not have access to the greatest cuts of meats, the fresh ingredients or seasonings.  It was and still is all about using what you have to achieve what you want your food to taste like.  Soul food goes beyond one’s particular culture though it is highly associated with the African-American community.  Soul food is simply food that speaks to your soul.  It’s about using the power of food to bring family and loved ones together.  A few of favorite that that I love but indulge in moderately are:

-Baked greens with a smoked turkey or chipotle flavoring

-Empanadas as a nod to my Latino background

ESSENCE.com: How does one ‘dine on a dime’ with limited access to fresh ingredients and sometimes limited funds?
ALLEN: It all boils down to choosing foods and ingredients that can be stretched and recycled.
Pasta and grains are great examples that go a long way with individuals as well as families For a little kick, incorporate add-ins like mushrooms, sun dried tomatoes, roasted garlic and toss with some olive oil, lemon juice and parmesan cheese. Though they may seem intimidating in price please don’t fret! They are readily affordable and provide powerhouse flavorings.

This mainly applies to those families on fixed incomes or receiving public assistance who tend to lean toward lots of packaged and processed foods which seem inexpensive but in the long run prove to be more harmful. If we shift the way individuals think about preparing foods then we can teach them how to bring together fresh ingredients on a dime to produce some amazing meals that go along way. I witness individuals reach for packaged foods like frozen lasagna or microwavable meals, chips and sodas and I just shake my head. They have no clue how super easy and cost effective it is to make something like lasagna from scratch.  Here are a few of my favorite tips I use when shopping:

-Search newspapers and magazines for coupons – you will be surprised how these savings add up in the long run.  Plus clipping coupons is the new BLACK!

-If you are cooking for large families, think about wholesale food stores such as Costco, Sam’s Club, and GFS

-Have a food budget in mind before shopping.  Don’t spend more than you have allotted.

-Shop alone. It’s therapeutic and you don’t have worry about the kids or your mate asking for anything that is not on your shopping list.