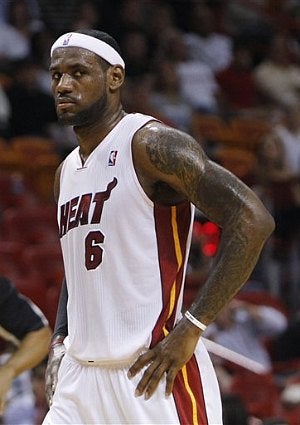 It was only a few weeks ago that LeBron James said he thought race had played a factor in the backlash against his decision to sign with the Miami Heat. James was subsequently accused of playing the race card. But did he play it unfairly? Bleacher Report columnist Dexter Rogers wonders. James has lately been retweeting the racist rants he receives on a daily basis, like the one that characterized him as “a big nosed big lipped bug eyed (racial slur).” James says he did to show his fans what he has to deal with. “I just want you guys to see it also,” he said. “To see what type of words that are said toward me and toward us as professional athletes.” Rogers says James is no more liked now than O.J. Simpson after his trial. “With respect to James being liked in the media by Whites, to now being largely disliked, is similar to what O.J. went through,” he writes. “When he orchestrated ‘The Decision,’ African-Americans were not irate, but rather, disappointed he left Cleveland. Once [Cleveland Cavaliers owner, Dan] Gilbert issued his rant and began burning James’ jersey, the media began crucifying [James].” Was James unfairly playing the race card? Rogers doesn’t agree. “He was expressing exactly how he believed all along.” What do you think of the concept of the race card?