Skip to content
By Nikki Bailey as told to Yolanda · Updated October 29, 2020 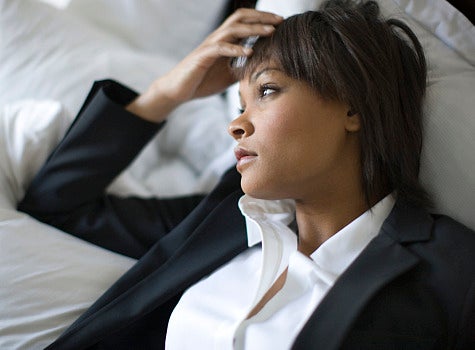 While in high school marketing coordinator Nikki Bailey, 37, would have episodes where she couldn’t get out of bed and would spend days crying. She didn’t know what it was, but surprisingly her mother would allow her “mental health days” to stay home and recoup.  “Somehow she understood what it was like to not be able to get out of bed and function,” says Bailey, “I think she had some issues with depression but no one talked about it.” Bailey would eventually be diagnosed with Bipolar II disorder while in college. She may have been diagnosed earlier had she understood the “language” and symptoms of depression, and not thought therapists were for “crazy” people:      When I was a teenager I wrote in my journal about having seen a movie about a guy who kills himself and asking my aunt if she had considered suicide. She said, “Oh God no.” In my diary I wrote that I thought about suicide all the time. I’ve probably been depressed since high school. Somehow my mother understood that something was going on with me because she would give me mental health days when I would have a hard time waking up in the morning. I went off to college, but by the end of my first semester I was staying in bed all the time and not sleeping. By the end of my third year I was suicidal and the dean of my college asked my parents to come and get me. During this time I thought my mood swings were because I was overburdened by the stress of college. It wasn’t until I was hospitalized after going home from college that I was diagnosed with depression. I have Bipolar II disorder, which means I have periods of extreme lows and mini-highs. During these wonderful highs I take on new projects and get a lot done. A low episode feels like you don’t care about anything and you’re at the end of the world. Your life feels like nothing and you start believing it’s always been that way. Depression lies by telling you this is how it will always be. When I’m in an extreme depression episode I hate myself, I hate everybody and there’s nothing anyone can say to make it better. I decided to go to graduate school to study religion. There was one week where I didn’t sleep for five or six nights. I called the seminary pastor because after several nights of not sleeping, my mind was playing tricks on me; I felt as if I were seeing things. She was an African American woman with a similar background as me and instead of calling the police she prayed with me. She understood where I was psychologically but also understood that I needed some assistance, spiritually. I don’t date a lot, and that’s not because of depression but because of the whole issue of professional Black women my age and how difficult dating is right now anyway. I’ve been lucky though because I’ve dated people who are very patient. I’d like to have children someday but I’m concerned about having to go off medication to be pregnant and also having post-partum depression. Depression is almost like you’re standing at the shore on a beach and you can feel the undertow pulling the sand from under you. It slowly pulls the real you from under you and suddenly you’re trying to keep your head above the water. You spend your time trying to rise of above depression and then you realize you’re in its grasp and you can’t fight it any more because it’s taken over. I’m grateful, though. I don’t feel like I’ve had a bad life because I’m living with this. Nikki Bailey is the founder of Black Women and Depression, an online support group for Black women. Read More:
Loading the player...

Everything You Need To Know About The New $80 Halo View Heal...

The Ultimate Holiday Gift Guide For The Kids In Your Life

Rosario Dawson And Warby Parker Want You To Say Yes To Sungl...