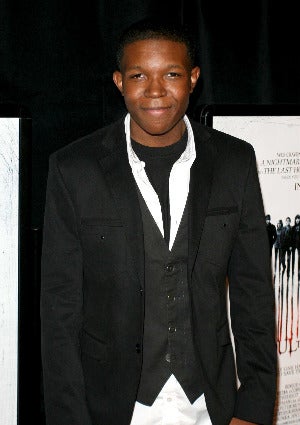 When was the last time you saw a decent scary movie? Ages, you might say. If that’s the case, check out “My Soul to Take,” out today. It’s the latest from Wes Craven and it stars Denzel Whitaker. He’s grown up since his days on the “Great Debaters” and we caught up with Whitaker to talk about “My Soul” and what else he has in the works. Check out what he had to say… ESSENCE.com: How did you get involved with “My Soul to Take?” DENZEL WHITAKER: My agent found the role and was like ‘Yo, D what’s going on? I got something for you. It’s Wes Cravens’ new project. He’s coming back to the scene, writing and directing…you’d be playing a blind kid.’ I was like, ‘Man! That’d be a challenge.’ So I read the script and I started to take a particular interest in the character because he is blind, then I was like ‘I want to do this.’ ESSENCE.com: Was it hard playing a blind person? Did you find yourself acting with sight? WHITAKER: It’s very hard not to act with sight. At one point, yes I did, have to act with sight, especially when my character is moving around. Moving about in this world and hitting my mark. And it was like ‘Denzel hit your mark,’ — ‘Well I’m blind!’ — or ‘Denzel where’s your eye line?’  — ‘Well, I’m not exactly looking at anything.’ So it’s finding a balance between the technicalities of filmmaking and actually playing someone who is physically blind. But I enjoyed it. I had a good time. I’m hoping it’ll come across well. I feel like as an actor, I did the best I could do. I just really wanted to be dedicated and I want it to be portrayed well. ESSENCE.com: Were you ever scared on set? WHITAKER: Of the actual creature himself? You know, I wasn’t scared of the creature, but a prank the cast members would pull is, we had this sort of lounge area where we would play video games and take naps. I was taking a nap one day and of course they had the actual monster sneak up on me and wake me up out of my sleep. Now I may not be scared of the actual monster but…you can’t even prepare for that coming out of your sleep. ESSENCE.com: How was it to die with tons of blood coming out of your stomach? WHITAKER: Messy. That’s the one word to describe that day. Then the blood dries up and so you’re walking around with crispiest t-shirt you could ever have, you can’t even lay down because it’s scraping your skin from all the blood that’s dried up but it was a complete mess as far as filming that scene. ESSENCE.com: How long did it take you to film that scene? WHITAKER: I want to say about four or five hours just shooting that one scene, just because of the clean-up that was involved and getting the different set-ups. It took a lot of finessing. ESSENCE.com: What’s next for you? WHITAKER: I have two projects that are in post-production now. One called “Warrior” which is a MMA fighting film. And the other is “Abduction” which is a high-budget action film with Taylor Lautner and John Singleton. I just finished both of those and I’m very excited.