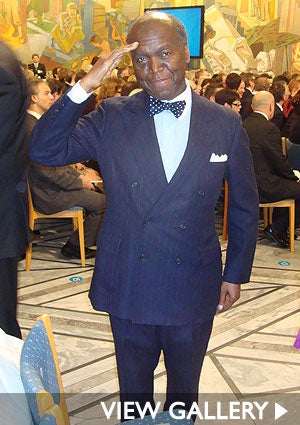 My maternal grandmother, a native of Tallahatchie County, Mississippi, used to relate a powerful story passed down to her about former slaves (her mother’s generation) who lived in a border state occupied by Union Army troops in 1864 or 1865.  She said that when a rumor circulated that a train would pass through the region on which Abraham Lincoln MIGHT be a passenger, many walked forty or fifty miles just to see the train.  They believed that little else on earth could consummate their newly-acquired freedom and align it better with their religion than being in the same space with a man whose election, words and deeds seemed biblically prophetic.  When Senator Barack Obama was elected President of the United States on November 4, 2008 I was reminded of that story and felt that all Americans might now appreciate the feelings harbored by those emancipated slaves nearly a century and a half ago.  It also informs these reflections on two ceremonies I attended involving our 44th President.

Through the kindness of friends in Scandinavia and intervention from on high, I received a personal invitation to the Nobel Peace Prize Ceremony in the Oslo, Norway City Hall on Thursday, December 10th, and to the Nobel Peace Prize Concert the following evening, December 11th, in the Oslo Spektrum.  It was a wonderful experience to sit there and witness the Norwegian Nobel Committee confer that most prestigious award upon President Barack Obama.

As was our good fortune to attend President Obamas inauguration in Washington on January 20, 2009, Professor S. Allen Counter, neurobiologist and Director of the Harvard Foundation, and I were in Oslo to witness another historic recognition of this gifted man.  Was it coincidental (really, really?) that he received the prize one day before the release of the film Invictus in which Morgan Freeman plays the role of President Nelson Mandela of South Africa in the 1990s.

Twenty years ago President Obama was a second-year student at Harvard Law School and President Mandela was serving a life sentence in prison in South Africa.  What dreamer could possibly have envisioned that these men would become president of their countries AND WIN THE NOBEL PEACE PRIZE?!? They DID and, in so doing, demonstrated our potential for change so profound that it seems surreal to those of us who can remember apartheid and Jim Crow.

David L. Evans, Senior Admissions Officer at Harvard College in 2002 he received Faculty of Arts and Sciences’ Administrative Prize, the most prestigious award an administrator can receive.