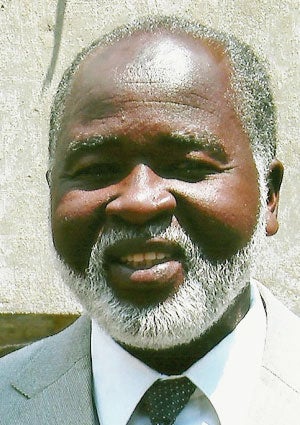 The radio announcer reported a level 7.0 earthquake in the Port-au-Prince region of Haiti, and in that instant all of my senses went numb. It was 6:47 p.m. on a Tuesday evening and as I drove along a dark stretch on the Garden State Parkway, I felt no fatigue from that 12-hour-day at work, nor did I feel the chill of an icy steering wheel in my palms. Over and over again I kept asking myself, “Is Poppy OK?” I whipped out my cell and quickly dialed his number. I got no response but the busy signal. With every passing minute, my mind wandered and I became lost in fearful thoughts. When I arrived home, I sent him and others emails and called every other family member in New Jersey to find out if anyone had better luck reaching him. None of us could reach anyone. For the next 21 hours, we placed hundreds of dozens of phone calls to Poppy but every call was met with the same nerve-racking, busy signal.

My father Saint-Jean, or “Poppy” as I affectionately call him, lived in Delmar 31 just a few miles outside of Port-au-Prince. He commuted into the capital city each day for work at the Bureau of Immigration. Poppy and I had an estranged relationship for all of my teen years, and we were finally reunited while I was in college studying at Princeton University. I would see him whenever he traveled into the states for his business trips, but most of the time we connected through our phone conversations. He would coach me on dealing with the stresses of college life and later helped me navigate the workplace as a new professional. I could always count on him as a wise source of loving advice and encouragement. A few months ago my two older brothers and I made plans to fly down to Haiti during the second week of January (this week to be exact). Because of conflicts with our work schedules, we then delayed the trip until February.

It was shocking to watch those graphic news videos showing so many distressed people and to hear of the horrific conditions. I went online and donated cash to the Red Cross and Wyclef’s relief fund. I updated my Facebook status to inform all of my friends of how they too could aid in the rescue efforts. I donated but still felt powerless.

All evening my eyes were glued to the TV screen, checking for updates on the earthquake coverage. Anxiety was strong in my household as we watched on with horror and feared for Poppy’s safety. It wasn’t until the following afternoon that I received a call from a cousin who managed to reach Poppy and confirmed that Poppy was alive and uninjured. Two days later and after countless attempts to reach him, my phone finally made it through and I was comforted by the sound of Poppy’s voice.

The threat of an aftershock could knock down any standing buildings, he explained. So although his home was intact, he was laying asleep out in the street when I woke him with my call. He attested to the resilience of many survivors but the normally conservative, modest Poppy shocked me when he explained that the harsh reality that he and many others are experiencing in Port-au-Prince was ten times worst than whatever I’d been exposed to in the news.

We spoke for a few minutes before the phone connection died, and I was unable to reach him again for the rest of that night. Having finally spoken to Poppy, I could breathe a sigh of relief. But on the other hand, when a reserved guy like Poppy outright tells you that things are worse than they seem in Haiti that is an urgent call to action.

To read about the White House reaction to offensive comments about Haiti, click here.

To find out ways that you can help the people of Haiti through this catastrophe, click here.