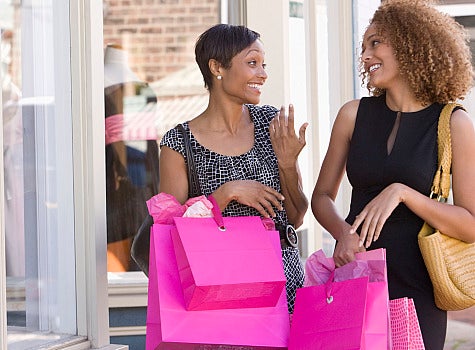 Ever wonder how to get designer clothes for a fraction of the cost? Style expert and television personality Daisy Lewellyn has the answers in her new book, “Never Pay Retail Again,” a style guide with tips on how to shop smart, spend less and look your best. ESSENCE.com caught up with Lewellyn at her fabulous book release to discuss how to rock Prada and still be a recessionista. ESSENCE.com: Define the term “bargain babe,” which you use in your book. DAISY LEWELLYN: First of all, “bargain babe” is the new black. And basically the bargain babe is the former shop-a-holic who ran into the recession. So, she’s still in her heart a shopaholic but she wants to save a little more money. ESSENCE.com: What is your philosophy on paying less for the best clothes? LEWELLYN: Shop smart. Something that’s $20 from Target or Kmart is not always a deal if it’s something that you bought just because it’s so cheap. Great, it was $20, but do you love the way it looks on you? ESSENCE.com: We are living in a time when bargain fashion-forward retailers like H&M and Forever 21 are all the rage. How does your book go beyond giving information about stores like that? LEWELLYN: In my book I talk about Target, I talk about Forever 21, I love Zara, but I talk about how you can actually wear high-end labels like Prada and not just fantasize about it. It’s going to help girls on both ends of the spectrum, because there are some girls who love to shop and they’ll spend money. They’re just going to be able to get more with the money that they spend. Then there are girls who really don’t spend a lot and they just feel like they can only go to one store. They’re going to learn how to step up their style and their game. ESSENCE.com: In the book you talk about how girls can transform their old clothes with a few dollars. Can you give an example? LEWELLYN: You go to Target and you see this cardigan that’s really cute. You walk past it and you pick it up. You turn back, another girl walks past it, she picks it up, another lady walks past it and say, oh this is cute, I’m getting it. So now you’ve seen at least three people buy the sweater within the last 15 minutes. Multiply that times however many minutes Target is open. Take that sweater and go to the fabric store or a notion store and get some gorgeous buttons: crystal buttons, colored buttons, gold buttons, any kind of buttons and replace the buttons. That can take your sweater from drab to fab. ESSENCE.com: You also are a big promoter of shopping at sample sales. Where exactly are the sample sales and how can the average woman get access to them? LEWELLYN: Of course, New York is the Mecca of samples sales. If you live in New York, you’re really sitting on gold. But if you don’t live in New York now, there’s a big trend and it’s not going anywhere–online sample sales. GILT.com is every fashion girl’s must have. But a lot of people don’t know about it. They just automatically go to the normal stores. Take a risk. Don’t just stay in your comfort zone. For more information on Daisy Lewellyn’s new book “Never Pay Retail Again,” visit www.daisylewellyn.com.