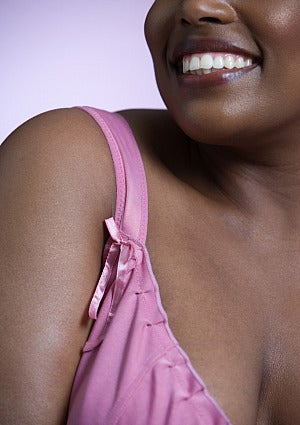 Okay, I was annoyed and pissed during my morning routine when I heard the anchor man state that ABC refused a Lane Bryant commercial because the woman featured had “too much cleavage”. PAUSE – Did you see the commercial? Homegirl in the commercial looks great!, I mean, I would be very happy if I was walking around the house in my panties and bra looking that fierce. Stomach flat and curves all over.  I’m really not trying to loose the curves, just the “little” (it’s all relative!) excess in the waist.  But um, I WAS told last night that my mid-section is just fine. OKAAAY! But that’s another blog entry for another day. PLAY – I mean, how many times have I turned on the TV to slimmies (PAUSE – stay with me y’all, that’s my term for skinny women and I put you on to that that a few entries back PLAY-) strutting their stuff down the runway with Vicky Secrets yelling “I’m pushing up this B cup to look like C cup” with angel wings blowing in the wind? Am I to accept that C cup cleavage is more acceptable than D/DD cup cleavage?  Uh…ABC, I believe there are quite a few people out there who do not agree. Many have cried discrimination on this one and I concur. So, let me get this straight, ABC would accept one of the Jonas Brothers advertising boxer briefs, but not Ray J? PAUSE – Laugh Out Loud! I’ve yet to see the alleged video, but word on the street is Ray J would be banned from ABC, you hear me? Banned! PLAY – Seriously, have you ever watched shows like “The Biggest Loser” or “Dance Your Ass Off”? I’ve watched in embarrassment and encouragement as obese people expose themselves to an unforgiving world with hopes of weight loss.  If you watch the shows, you’ve witnesses a very unhealthy woman walk up a few stairs in a sports bra and spandex with her stomach hanging and arms jiggling; mount a scale and share her pain and struggles with the world. Is that not too much? Why hasn’t that been banned? Is it accepted because it shows the ugly side of obesity and the fight to be healthy? Or let’s go to the slim side: “The Bachelor.” Almost every episode debuts a new push-up bra bikini on each and every woman in the house. The women walk around and sit on the Bachelors’ lap and kiss him and make sexual gestures, and that show doesn’t skip a season. I mean, they even have the follow up called “The Bachelorette” with just one woman walking around in every episode in her bikini. And WHY is it okay to have commercials with slimmies wearing push-up D cups as they walk down the street with cars blowing up in the background or lay on pool tables with their behinds in the air while the narrator of the commercial asks “What’s Sexy”? And the thick woman with the D-cup is banned? I am confused.     Okay, I am plus size (a solid 16W, tight 14W on a good day) and I have insecurities about it on occasion. The saddest thing, in my opinion, about the battle of the belly is that everyone knows your battle. Yeah, I know there are people out there that say “I am good with being a big girl and I don’t want to be a size 6.”  Cool, maybe you don’t want to be a size 6, but you do want to be healthy. And too big ain’t healthy. Period. I want to lose weight for “healthy” reasons and I also know that I am more ascetically pleasing to myself at a size 12 or 14 (no W on it!). Many suffer silently from a drug problem or a gambling problem or sex addiction. PAUSE – I am so tired of THAT excuse from men who just do not want to get out the game and settle down. Just don’t get married and admit that you want to have sex with different women forever. Honesty is appreciated. I am not saying that sex addiction is not real, but every cheating man is not addicted to sex. PLAY – These addictions can be masked to a certain extent, but when you’re battling a food addiction or emotional eating disorder or just plan lack of self control when it comes to food for whatever reason, you cannot hide it. The whole world knows. It shows in your thighs, on your cute but chubby face, your “not so cute in a midriff” tummy. It shows and the worst part is you can’t hide it. So yeah, I am pissed because Lane Bryant made curvy look good.  Hell, I make curvy look good! But Lane Bryant attempted to share it with the world; helping all Plus Size Models (in our heads) all over the world feel good about being well, plus size and here comes ABC tell us that D’s ( and the full figures that come with them) are too much. Sucking my teeth…   Head up…stomach in, neck long, heels on, chest (D’s) out… For more “Plus Size Model In The City,” click here.   Related stories:
Loading the player...

Amazon Burning Through Workers So Fast, Executives Worry The...

What You Need To Know About the Child Tax Credit