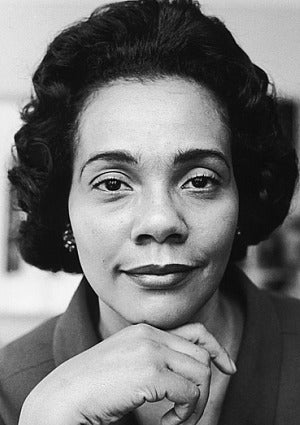 Coretta Scott King was one of the most iconic women in the Civil Rights movement. Today, she would have turned 82 years old. Born in Marion, Alabama, she graduated at the top of her high school class. Later the aspiring singer received a B.A. in Music and Education from Antioch College in Yellow Springs, Ohio, and then moved to Boston, where she earned a degree in Voice and Violin at Boston’s New England Conservatory of Music. She met Rev. Martin Luther King, Jr., in Boston, who at the time was studying for his doctorate in Systematic Theology at Boston University. The pair married on June 18, 1953 and a year later moved to Montgomery, Alabama, with Mrs. King filling the new role as a pastor’s wife at Dexter Avenue Baptist Church. In 1968, Dr. King was assassinated and Mrs. King carried on his message throughout the remainder of her life. The passionate activist devoted herself to create the Atlanta-based Martin Luther King, Jr. Center for Nonviolent Social Change as a living memorial for her husband. She, along with three of her children, were arrested in 1985 at the South African embassy in Washington, DC, for protesting against apartheid. The humanitarian has received honorary doctorates from over 60 colleges and universities, authored three books, and penned a nationally syndicated column. Mrs. King has served on, and found, dozens of organizations such as the Black Leadership Forum, the National Black Coalition for Voter Participation, and the Black Leadership Roundtable. She died on January 31, 2006, in Mexico. The cause of her death is listed as cardio-respiratory failure, cerebral vascular illness, and ovarian cancer. Related stories:
Loading the player...