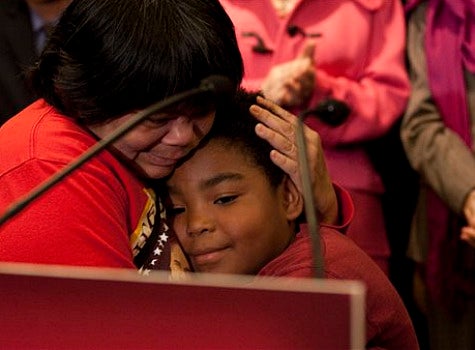 Conservative talk show hosts Rush Limbaugh and Glenn Beck must really be running out of talking points to be targeting Marcelas Owens, an 11-year-old boy who’s mother died of pulmonary hypertension in 2007. Owens has been appearing at pro-health care reform press conferences with Democrat leaders retelling the story of how his mother lost her job, her health insurance and eventually her life because of a lack of care. Limbaugh had these comforting words for Owens: ‘Well, your mom would still have died, because Obamacare doesn’t kick in until 2014.'” Beck, who comes from Washington state (Owens is from Seattle) dismissed the Owens’ family’s desperation, saying there were plenty of programs that could have helped save the boy’s mother. “Since all of the groups are so concerned and involved now, may I ask where were you when Marcelas’ mother was vomiting blood?” Meanwhile conservative pundit Michelle Malkin called Owens a “lobbyist” who has been “goaded by his left-wing activist grandmother.” Sheesh. We shouldn’t be surprised the right is doing a bit of fact checking on the story, it’s only fair in a democratic society. But these schoolyard insults cloaked in adult talk makes you question who’s really being immature here. “My mother always taught me they can have their own opinion but that doesn’t mean they are right,” told the Baltimore Sun. Now that sounds like someone keeping a cool head. Read More: