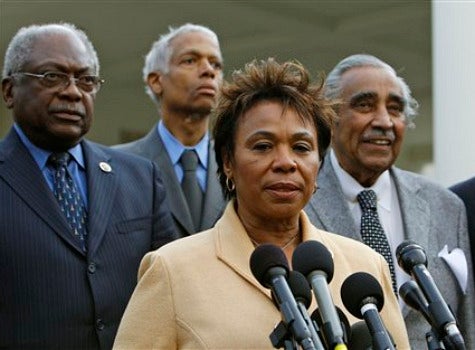 These are dicey times for Congressional Black Caucus Chair Barbara Lee. There are just three weeks left before Congress adjourns for summer recess, and she is laser-focused on two outstanding pieces of the CBC agenda: Youth jobs and a discrimination settlement for Black farmers. With both items attached to the unemployment benefits extension bill, which the Senate will put to a vote on Tuesday, she is “cautiously optimistic” about crossing them off her list soon. Meanwhile, the Oakland, California, Representative has also asked the Department of Justice to review the case of Oscar Grant — an unarmed Black man who was fatally shot in 2009, while lying face down, by an Oakland police officer. A majority-White jury recently convicted the former officer of involuntary manslaughter, sparking national outrage for being too lenient. In a media roundtable, ESSENCE.com talked to Lee about the lawmaking roadblocks she’s facing, what she wants the Justice Department to do, and whether or not she feels that President Obama has the Congressional Black Caucus’ back. ESSENCE.com: You’ve been advocating for youth jobs funding since last November — what’s the resistance you’re getting from Senate leadership? REPRESENTATIVE BARBARA LEE: It’s the strangest thing — no resistance. Every time we talk to members of the Senate, they say, “Oh, yeah.” From the President on down, I don’t think we’ve had one “No.” So, I have no idea. But it’s been really hard to get $1 billion for young people to get jobs. It’s an example of how dysfunctional this place is, and how noncommittal they are to addressing the economic recovery and the jobs crisis. ESSENCE.com: Tell us a bit about your reaction to the Oscar Grant case, and the verdict recently handed down. LEE: I’m outraged. This case is tragic, and while no verdict, of course, is going to bring back Oscar Grant, it’s sad we haven’t gone further in terms of reforming the criminal justice system. I think the video speaks for itself. Everybody in the world saw what happened, and then to have this outcome… this is why we want to have the Justice Department look into that more. ESSENCE.com: What specifically do you want the Justice Department to do? LEE: I have civil rights concerns because there were no African-Americans on the jury. There are a lot of legal issues that need to be addressed that the lawyer from the Justice Department, who I’ve been talking to, also communicated. We wrote them a letter, and they’re moving on it, but the process is that they conduct a review first to determine whether or not an investigation is warranted. ESSENCE.com: Regarding legislation that the CBC has been able to get through over the past 18 months, how do you feel about the way things are going? LEE: There are a lot of challenges, a lot of competing forces, but we’ve been able to speak with one voice. We’ve been able to push for our agenda together. Naturally, we have our disagreements, but when we’ve taken a position and moved forward, we’ve stuck together. I’m very proud, and I think we’re going to have more successes. When you look at the energy bill, we made sure [green jobs] provisions central to our community were supported. When you look at the Recovery Act, we insisted that it include targeted funding for disconnected youth. In the health bill, we got most of our disparities provisions in it, funding for community clinics, and $2.5 billion for historically Black colleges. We’ve gotten a lot of stuff that never would have been in there had it not been for us holding the White House to it, and having Senator Reid and Speaker Pelosi make the case for it. ESSENCE.com: There’s always chatter about how the CBC has a rift with President Obama, in terms of him not focusing enough on African-Americans. How would you rate his agenda thus far, in terms of the Black community? LEE: He knows all the issues, and each time we meet with him, it’s like, “I get it.” There’s not really a learning curve there. What the CBC has to do, which is what we are doing, is remind him. If forces pull him in another direction that doesn’t make sense for the entire country and would leave out the Black community, it’s our job to remind him and make sure he knows. I’ll give you an example. When he put forth [New Hampshire Republican] Senator Judd Gregg as nominee for Secretary of Commerce, I said, “Oh, no!” The Department of Commerce is supposed to create jobs, and help minorities and women own small businesses, and this man’s voting record is totally antithetical to that mission. So I had to take that on. The day Gregg pulled his nomination was actually the day he was supposed to come to a CBC meeting. But I expressed my concerns to the President respectfully. Each individual member has their own relationship and can tell you how they relate to the White House, but I think as the CBC we’ve been very respectful. For any issues we have to deal with, it’s a process that we work through. For more of Cynthia Gordy‘s Obama Watch stories, click here.
Loading the player...