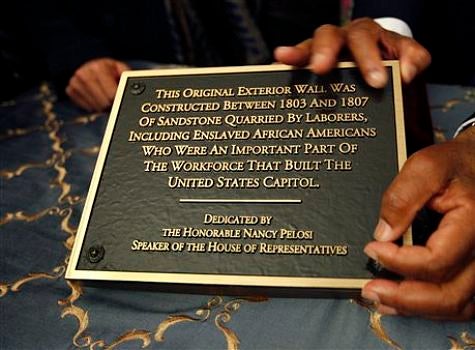 “Today we shed light on a long-hidden truth.” So began Congressman John Lewis’ remarks on Wednesday afternoon, at the unveiling of two bronze plaques honoring enslaved African-Americans who helped construct the United States Capitol Building. Members of Congress and guests, including Republican National Committee Chairman Michael Steele and Labor Secretary Hilda Solis, crammed into the Capitol’s wood-paneled Rayburn Room to acknowledge the enslaved Blacks who labored, in the late 1700s and early 1800s, on the country’s most recognizable symbol of democracy — but went unrecognized until now. “Imagine constructing this nation’s Capitol Building with your own two hands,” said Lewis, incidentally underneath an oil portrait of slave-owning president George Washington. “And the United States government — our government — paying not you, but your owner, five dollars a month for your labor.” House Speaker Nancy Pelosi and Senate Majority Leader Harry Reid also gave remarks, along with Republican Senate Leader Mitch McConnell, who relayed the story of Philip Reed, an enslaved Black man with a critical role in erecting the Statue of Freedom that crowns the Capitol dome. Reed was the only one who could figure out, when the statue arrived in Washington from Italy, how to disassemble its plaster mold and cast it in bronze. The plaques, to be displayed in the Capitol Visitors Center and the Old Senate Chamber, were ten years in the making. They were recommended by a task force of historians convened in 2000, after the discovery of old pay stubs showing that slaves helped construct the Capitol Building as carpenters, masons, roofers, painters and other roles. The recommendations, which also included an exhibition on 19th-century African-Americans and educational brochures on slave labor in the Capitol (but, not so fast: nothing on reparations), were presented to Congress in 2007, with the plaques finally coming to fruition this year. “I’m just delighted that this has been brought to a head,” said former Congressman J.C. Watts, an original co-sponsor of the resolution to organize the 2000 task force. “And that we’re having a formal ceremony to do it.” As Congressman Lewis explained, the markers’ significance extends far beyond a simple “thank you” for the backbreaking labor of our ancestors. “Slavery is part of our nation’s history of which we are not proud,” he said. “However, we should not run away from it or hide from it. The history of the Capitol, like the history of our nation, should be complete. As thousands of visitors walk through here, they leave without knowing the true history of its construction. Today that changes.” For more of Cynthia Gordy‘s Obama Watch blog, click here.