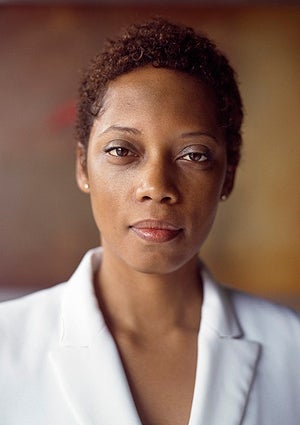 A couple weeks back, I’m transferring from one subway train to another at a busy stop in Brooklyn. It’s after rush hour so it’s like Metro Center in DC crazy, but not Grand Central in Manhattan crazy. So there’s this woman walking. She’s in loose sweats, minding her business as she heads down the corridor. It’s not lost on me, a woman, that she has an Erykah Badu booty. So there’s a man walking behind her, enjoying the view. He’s a little blatant in his eye-humping, but she can’t see it. She turns, walks up the stairs. The man keeps looking at her go, almost running into another. He catches himself just before impact and by way of excuse and apology he says to the gent, “bitch got a fat ass.” Record skip. I screwed up my face and glared. Why she gotta be a bitch? All the words in the English language to describe a woman and “bitch” is the one he goes with off the top? It stung even if it wasn’t directed at me. Just because here’s this woman just walking, minding her business and this, THIS is how she’s considered just for being and having the misfortune to attract the attention of this guy for being shapely on a warm day. This, THIS is how someone somewhere has considered me simply for being at any given time. And no, I don’t know those people, I hope. And I should not care what they think. But I do. ‘Cause when people talk about you as less than human, they view you as less than human, and then they treat you less than human. That interaction got me to wondering what is wrong with us as a people where this, this calling women out of their name without a second thought is “okay.” Because it’s not the first time I’ve heard a woman blatantly disrespected for no reason. And surely it won’t be the last. I’ve certainly been called a bitch, by guys in arguments, by guys driving by with booming systems, by guys on the street, etc. I’ve been in conversations with men or groups of men where interchanging “woman” and “bitch” in the presence of a woman wasn’t a passing thought. “Bitch” (and “ho”) is either so commonplace in their lexicon that it rolls off the tongue or so frequently used by everyone around them that they don’t even realize it’s offensive. It’s like some guys, even educated ones, just all together missed an obvious social cue. And often, they are startled when I check them on it. And I always check men I know if they use it to refer to women in general or in “unsubstantiated cases.” (Last week a guy at the barbershop was talking about how his girl locked him out of the house and he was left outside banging on the doors. He called her a “bitch.” I let it slide, but he apologized for his “French” anyway.)   As a writer, I know words are not just words. Our choice says a lot, say the way CNN has Blacks “looting” food during Katrina while White folk “found” it. The way “bitches” just rolls off the tongues of so many Black men would seem to speak to a larger cultural issue that reveals the general dismissal, or maybe disdain, for Black women by some Black men. And perhaps that sub-par-ness and hostility in which we are viewed, as evident by the words chosen to describe us, has some to do with the tragedies that are played out upon us. And when I say tragedies, I’m thinking about domestic violence (35% higher for Black women than that of White females), murder (5x higher than White women), etc. Like, wouldn’t it follow if you don’t see me as worth respecting that it’s that much easier to disrespect or mistreat me? Bright and early this morning, my BFF Tariq hit me with an untitled email. I click. It read: “You can at least say ‘hi’ you dirty bitch,” says the gentlemen to the young lady as she walks by and ignores his overture of ‘hey sexy.'” He overheard that on the way to work. Discuss. Demetria L. Lucas is the Relationships Editor at ESSENCE and the author of the upcoming dating advice guide, A Belle In Brooklyn: Advice for Living Your Single Life and Enjoying Mr. Right Now (Atria, June 2011) Follow her on Twitter at @abelleinbk