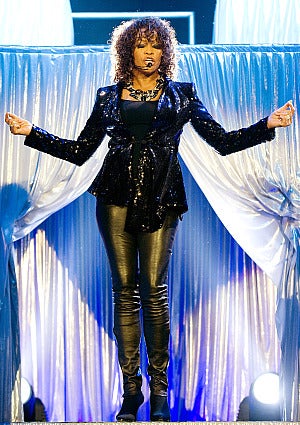 British columnist for Parlour magazine Miss London describes her experience while attending the Whitney Houston concert in London. I’d had such high hopes. I really did. I’d bought myself and five other members of my family tickets to Whitney Houston’s London concert for Christmas. We were apprehensive, but decided to “keep hope alive.” She wouldn’t be on tour if she was that bad, would she? I mean, maybe all these stories about weak performances were exaggerated, surely? Turns out there was no exaggeration. We walked out about halfway through because we just couldn’t cope sitting through that karaoke-like performance Whitney was struggling to pull off. It was during “I Will Always Love You” that I had to walk out–in fact, I wanted to do it several songs earlier. But Whitney’s an icon and I wanted to believe that she would finally get her ‘ish together. In the first 45 minutes, she sang four songs. Four! Too much chat, not enough singing. Too many gaps in the middle of songs where she was obviously trying to find the strength to sing the high notes. In fact,she stopped midway during a couple of her most well-known songs, as though she couldn’t face the rest. I say a couple, because to be honest–she hardly sang any of the old stuff, I suspect–she knew her voice couldn’t handle it. It hurt. I mean, it really hurt to see her in such bad shape. She blamed the air-conditioning for her poor performance. She said her voice, aka “the old girl,” was a tad tempermental at the moment. Blah blah blah. A bad carpenter never blames his tool… To read the remainder of this story, click here… Related stories: