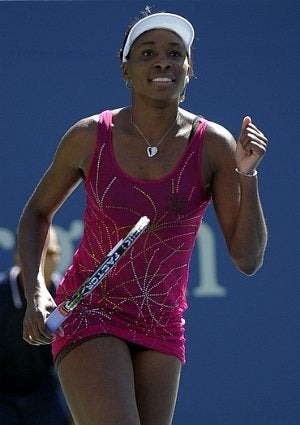 Here’s a quick U.S. Open quiz for you: Did Venus Williams win or lose her last match against whatshername this past weekend? Betcha don’t know. Heck, I don’t know. But I do know what she had on: a pink transparent skin-tight sequined dress paired with dark bedazzled underpants. The 30-year-old tennis champ’s outfits have left fashion lovers and sports fans screaming a universal, “Girl, what were you thinking?” To be fair, Williams is a fashion designer by training, and her designs are often inspired by the city or country she is playing in. For example, the firework motif in her latest outfit was in honor of New York City. Um, okay. I’ll admit, back in May when Venus wore her now infamous flesh-tone underpants at the Australian Open, I defended her right to wear whatever she wants. I was her champion when she wore a red lingerie-inspired satin dress at the Sony Ericsson. But by the time sister-girl wore a lacy can-can outfit at the French Open, I was ready to throw away my rooting-for-Venus placard, because, let’s face it — the outfits were becoming a distraction. Now instead of waiting to see what kind of game will be served by one of the greatest tennis players the game has ever seen, we’ve begun anticipating how racy her outfits will be. During the game, commentators John McEnroe and Dick Enberg couldn’t help but take pot shots, at one point having this bizarre exchange:

John McEnroe: I think that dress has distracted [Venus]. Dick Enberg: It’s distracting you. McEnroe: That’s a fair point. Enberg: It sounds like it might be a distraction to her opponent. McEnroe: Well, she’s tugging at it. She’s uncomfortable with it.

So revealing was Williams’ outfit at this past weekend’s match, that reporters spent much of the post-game press conference asking about the dress. “This outfit was supposed to be about New York,” said Williams. “It’s like bursts of fireworks.” Again, the outfit took precedence over her game. I’m in no position to say what a successful self-made Black woman (and role model) can and cannot wear, but I’d like to point out that while Venus has every right to wear what she wants, the world we live in isn’t so accepting when women take risks on the court. Take, for example, the fact that players like Rafael Nadal and Andy Roddick are famous for tugging at their genitals during matches, but you’d never hear of CBS counting how many times they did — as they did with Venus this past Sunday. So while conforming to tennis fashion standard isn’t necessarily the answer, maybe it’s fair to ask Venus to look for inspiration somewhere else. Can she look for design inspiration in Michelle Obama, instead of a Victoria’s Secret catalogue? And by the way, Williams was playing Israel’s Shahar Peer, whom she defeated.