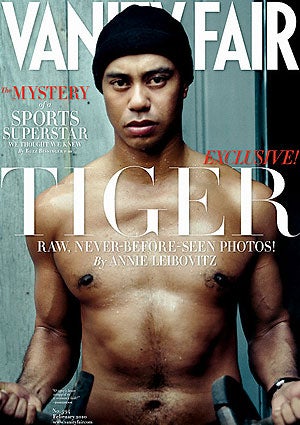 I was annoyed, for multiple reasons, to see Tiger Woods pop up on the cover of Vanity Fair yesterday. But I get why he landed there; Vanity Fair is a media entity that covers big stories. And when they went to press last year, Tiger was a huge story. This year?  *Yawn.*

I’m over the story and it seems like harping to dwell on a man who has gone underground (allegedly Africa, oh, the humorous irony) made no public appearances, and granted no interviews since the fateful collision that destroyed his carefully constructed goodie two shoes image. But I object to the Vanity Fair cover for more than a beating of a clichd dead horse.

I don’t get it. Tiger has never been a convict, associated with convicts, associated with anyone that associated with convicts.  And yet his image on the Vanity Fair cover screams “Locked Up” (cue Akon.) The bare chest, the barbells, the menacing glare, (exactly the same as 50 Cent on the cover of his debut disc “Get Rich or Die Trying”), yellowed eyes, pouting mouth, and especially that durn skully practically scream “I’m a thug in the San Quentin prison yard.”

The photograph is in direct contrast to all the images we’ve ever seen of Mr. Woods. And I get that in the last few weeks we’ve seen a new side of Tiger, a contrast to all we ever thought of him. The dichotomy between what is image and what is real that the photo is evoking isn’t lost on me. But this image of Tiger doesn’t reflect what we now know of the billion dollar gentleman who prefers blonds. Tiger might be a whore, a cheat, an infidel, a sex addict, straight up trifling and a whole lot more. But a Black man breaking off White women hasn’t been a crime as defined by any American penal code since Loving v. Virgina back in ’67. Thus, Tiger doesn’t deserve to be depicted as a criminal in light of his recent scandals. Reaching back into the Annie Leibovitz archives for a photo of Woods that makes him look all darkened OJ on the cover of Time? Well, that’s just (stereo)typical. And wrong, considering the, er, timing and all.

In thinking about the ill subliminals to the cover, I wondered if I’d finally gone off the deep end. I mean, for all my stiletto strutting and staunch hair straightening, I’m still a revolutionary spewing Black Panther ideology and quoting Malcolm X (pre-Mecca) on command. Perhaps I’d finally taken my bring-down-the-Black-man conspiracy theories too far. (Pause. No matter what Tiger wants to call himself, he’s Black. His daddy was Black, which makes him Black.)

I headed over to The Root seeking a reality check.

“[Tiger] looks like he’s pumping in The Yard,” began one commenter on The Root’s coverage of the Tiger Woods’ cover. “This time it’s Evil Woods, this isn’t Cosby-sweater, Christmas party Woods. This is serious Woods…. This is Vanity Fair letting out what White people expected in the beginning of Woods. This is just another Black guy who might be in jail Woods.”

I found another comment from a poster who calls himself “OJ All Over” that confirmed I was onto something:

“The same way TIME magazine sent O.J. Simpson back to ‘blackness’ after his mess with Nicole & Goldman, Vanity [Fair] is sending Tiger back to ‘blackness’ in the wake of his sex scandal. Let’s be honest here: it was Tiger’s ‘black side’ which got him chasing all these white women and losing control of his sexual urges, right? …That’s how prejudice functions in our society. Vanity [Fair‘s] cover is simply reflecting America’s sickness!”

Does anybody else realize how nuts this is? That somehow we are able to soberly discuss with some validity once clean-cut, American–or er, Cablanasian–apple pie Tiger Woods in the same sentence as OJ Simpson (the Vanity Fair article alludes to OJ as well) all because he “transgressed” against his wife?!

I mean, this is Tiger Woods we’re talking about, a smiling, Ralph Lauren-down, khaki-wearing, come-to-life Carlton Banks if ever there was one. Black men didn’t come more beloved by the “mainstream” than him–well, not since OJ. And suddenly Woods is some sort of national menace (the Vanity Fair article referenced a man who felt “duped and betrayed” by Tiger’s actions) for cheating on his White wife with a gaggle of White women?

Like Nell Carter once said, Give me a break! And while we’re at it, give Tiger one too. He’s a philandering husband, not an accused (and found not guilty) murderer. And while we may be disappointed with his actions as of late, that’s no reason to equate his passion for women with a passion for thug life.