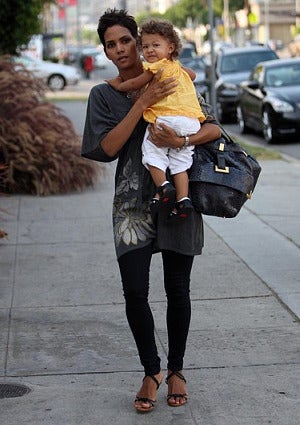 So, Halle Berry is now a single mom. Not the “working hard and struggling to pay bills and spend time with her child” type of single mom, no. She’s a Hollywood single mom. This is that special tier of single mom-hood, where the fact that you’re rich and solo parenting is celebrated — rather than stigmatized — in the pages of our favorite tabloids, blogs and magazines. We won’t label her a “baby-mama” or wag our judgmental fingers and say Berry “did this by choice” the way we do with other single moms. Nor will her new status mean less pay in the workplace (in her case, Hollywood) as it does for regular single mothers (more on that later). Instead, we’ll leave comments like “you go girl” on message boards and read headlines like “No husband? No problem,” as I found on a magazine site recently. In the real world, we’re not as encouraging of single moms. In fact, a recent study conducted by Project Single Mom in conjunction with eLearners found that 44% of Americans don’t think single moms “are respectable.” More often than not, they’re seen “as bad parents who have broken, incomplete, dysfunctional families,” as noted by law professor and author Nancy Dowd. But why the double standard when it comes to single, rich and famous moms? As coverage of Sandra Bullock, another newly single mom, reached a fever pitch last week, I came across another headline that piqued my interest: “Sandra, you can do it alone!” it read. “Look at how other celeb moms do it alone.” Really, I thought. Can she do it alone? Granted Bullock’s ex-husband was a scumbag and gave her no other choice but to raise a child alone. But why do we somehow think she’ll be fine just because she has money? Is it the same when well-educated, accomplished Tiffany (news flash: lots of single moms are educated) from down the street becomes a single mom after a failed relationship? Rarely. The truth is single mothers are often discriminated against — from the workplace to housing and other sectors. In the workplace in particular, while married moms earn 73 cents to a man’s dollar, single mothers earn only 60 cents in comparison, according to a study published in the American Journal of Sociology. But back to Bullock and Berry: these two deservingly well-accomplished women will be able to “do it alone” after all — with chefs, nannies and drivers, wouldn’t you? But what about emotionally? We’ve seen time and again that money isn’t always the answer when it comes to raising children. I don’t question Bullock and Berry’s mothering skills (I must admit, Halle seems like a kick-ass mom), it’s our obvious double standards that make me uneasy. In a perfect world we’d encourage all mothers — married, single, rich, poor — but we don’t, so I ask, if we’re going to criticize regular single moms, why aren’t we as critical of celeb single mothers?