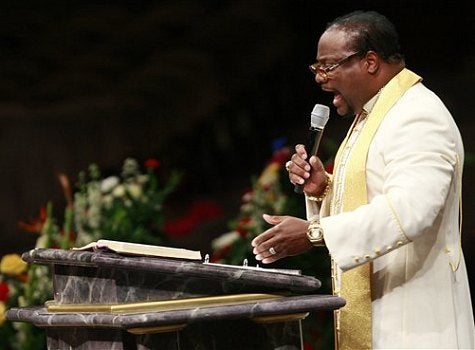 This week we were actually not surprised at all to learn that another “mega-church” preacher was accused of doing in his private life the exact thing he threatens hellfire against from the pulpit. The consistent deluge of moral hypocrisy from evangelist clergymen has them running neck and neck with GOP elected officials in the “Who-can-hate-the-most-in-others-what-they-actually-do-themselves” 4×4 relay race… Which brings us to metropolitan Atlanta. Two Georgia men have alleged that Eddie Long*, pastor of 25,000-member New Birth Missionary Baptist Church, coerced them into sexual acts that began when both were teenagers. The salacious details of the case unfold like birthday gifts to “The Boondocks” writing team. None of the checklist items of career-ending sex scandal are spared here. The plaintiffs separately filed complaints that accuse Long of exploiting his spiritual authority over them in order to solicit sexual acts in exchange for lavish gifts, trips, cars and electronics. I have always considered public allegations against sham moral leadership to be good wholesome family fun, and for the moment, we are all entitled to be swept up in the licentious hoopla of it all. But to stop short of understanding what should be our real problem with Long’s message and politics only baits our own homophobia. This is not Eddie Long’s fall from grace, for he never should have been in our good graces. Let us consider that the Reverend’s most serious offenses against our conscience were committed proudly in broad daylight. I resent Long most for his screen-stealing role in the 2004 presidential elections in which he, with followers in flock, successfully organized a march in support of the Georgia state constitutional ban on same-sex marriage. Many debated the usefulness of throwing one’s support behind a ban on something that was already illegal — and was undoubtedly going to remain that way in the state constitution. But this feigned interest in protesting “non-laws” only served to distract Black folks from the insidious political aims of the movement: to align Black religious homophobia with right-wing neo-conservative politics (George W. Bush received 11% of the Black vote in that election, by the way. The math does itself). Long’s sexuality is not the scandal here. It’s the danger his homophobic rhetoric does to our communities. I’m disappointed Rev. Long “allegedly” engages men in sexual acts, but not for moral reasons. I don’t want Eddie Long to be gay, much like I don’t want Michael Steele to be Black or Sarah Palin to have a functioning uterus. Like the latter two, Long runs the risk of co-opting his experience into a pre-assembled tirade against progressive America (I see Long, kneeling in self-tattered velour robes before his own congregation, urging them to go forth and trample the devil of homosexuality that “nearly” conquered him). To harp over his gay-ish-ness further serves as a smokescreen for what many suspect is the much more interesting part of this story: the money. From what coffers was Long paying for these “gifts, cars, trips, and electronics”? The other shoe is bound to drop in this case, and I for one am highly interested in learning if the flock was fleeced. If there is a crime here it is likely to be found in his spreadsheets, not his bed sheets, and for some reason I doubt there is a line item deduction for “coerced teenaged gay sex” in the church ledgers. *(Because the Baptist church does not function under a system of dioceses, I will not be referring to Rev. Long by his self-ordained title of “Bishop.”) Saida Grundy is a doctoral candidate in the Department of Sociology at the University of Michigan at Ann Arbor.