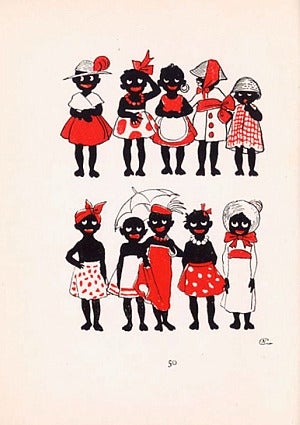 Recently, Kanye West posted images from a book of early 1900s British children’s stories, featuring a nursery rhyme called “Ten Little Nigger Girls.” The poem is actually the second part of the release illustrated by G.H. Thompson, the first being “Ten Little Nigger Boys.” Years later, Thompson turned to another oppressed group to produce “Ten Little Indians.” The poem starts with ten little nigger girls, in black face with bright red lips, who, one by one, page by page, begin to disappear by all sorts of random acts and tomfoolery — one was burned up while making toffee sticks, another was taken by a bird while having her tea, one was playing with a hive, and yet another was eaten alive by a big fish! Gasp! Now, I’m all for teaching children how to count using rhymes, but I think we all know there are some real issues here. Something more subversive than the good ole’ fashion racist ignorance of the time. It is also noteworthy that in this version of “Ten Little Nigger Boys,” the boys keep multiplying. Their count goes up, it is the girls who start at 10 and end with zero. First, for some context, the book is old, like real old, back when the N word still had all of its sting and none of its pop culture controversy. So, it’s unfortunate to see how such hateful words infiltrated mainstream thinking as acceptable and were even published as normal literary fare… for children, no less. The book was also published in the U.S. According to some researchers other books such as “The Funny Little Darkies” and “Simple Addition by A Little Nigger” followed because of the book’s popularity. At the end of the day, “Ten Little Niggers,” girls or boys, was designed to show our inferiority as Blacks and then passed off as comical and educational. It was powerful propaganda at the time. Imagine ten Black girls with nothing much to do all day who engage in senseless activities, like “playing with a hive,” something that would be viewed as foolish by anyone with common sense. And the real message here is that, in the end, leave us to our own shenanigans and we will destroy ourselves. And, while it really sickens me to know that denigrating our young boys and girls for amusement was acceptable, and even profitable, the question is: has anything really changed? The point was then, as the point continues to be in modern media now, that to show Black people as incompetent, ignorant, buffoons and dispensable humans is certainly okay. First in books, then on television and movies. And it continues today even in so-called award-winning movies like “The Blind Side,” and many more of its kind, where we now need well-intentioned White people to save us because we are incapable of saving ourselves. The messaging is dangerous. I’d rather be eaten by a big fish. The mental conditioning that occurs on both sides of the table when we are characterized as “less than,” whether in Black face or in our own faces, is insidious yet powerful and leaves us with a lot of work to do to redefine who we are as Black boys, girls, men and women. Books like these are simply a reminder of the deeply entrenched thinking about Black people that needs to be undone. Of course, this could all be much ado about nothing when many of us are back to calling ourselves niggers anyway. Kanye West included. Kimberly Seals Allers is an award-winning journalist, founder of www.mochamanual.com, a parenting destination for Black moms. She lives in Long Island, NY with her two children.