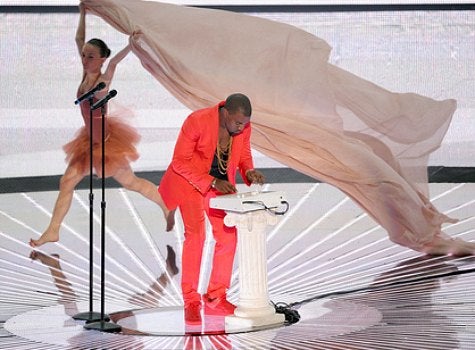 Maybe seeing the world in Black and White isn’t the best way to live your life, but sometimes, something comes along that shows how much race can creep into the most unsuspecting spaces, like an awards show, for example. Yes, pop culture’s juiciest showdown of the moment, Taylor Swift vs. Kanye West, took place last night at the 2010 MTV Video Music Awards, and it was highly intriguing. There was Swift’s patronizing ode, no doubt directed at West. “Who you are is not what you did,” she sang. “32 and still growing up … Lost your balance on the tightrope, it’s never too late to get back.” There she was, lily white, barefoot and “innocent,” dousing herself in self-righteousness and teaching a man 12 years her senior about forgiveness. Then came West in a fire red suit, menacing and seemingly unrepentant — for the moment. “Let’s have a toast for the d-bag,” he sang. “A toast for the A-holes.” No doubt West brought this on himself by resurrecting his apology to Swift via Twitter last month. But hadn’t she said she was over the whole debacle? Yet last night Swift made a point to paint herself as yet another innocent victim of this Black man’s misdeeds. Is it me or would it have gotten her “you go, girl” points if she had just said, “You know what Kanye, you’re a d-bag so eff you.” But perhaps taking the victim route sells. The moral cues of both artists’ juxtaposed performances played so unbelievably well into the racial politics of this crazy world we live in. As Swift sang her sweet ditty, Twitter was on fire with the racial implications of the moment. “If Taylor Swift weren’t a cute White girl no one would care,” wrote Sflorini. “I’m going to go ahead and say it. White woman victimization card,” tweeted Bassey Ikpi. “You got interrupted. Nobody raped, maimed or murdered your a**.” If only West and Swift wouldn’t have played so perfectly into their roles: the innocent White girl and the supposedly menacing Black man. Like it or not, pop culture is a reflection of our reality and cannot be dismissed as having no meaning or value. Case in point: As soon as Swift’s performance ended, commenters on sites like EW.com couldn’t help but take it there. “Kanye West is a d-bag n***,” wrote one commenter. “I hope he meets up with his mom in hell real soon.” One wonders if we’d still be talking about this a year later if West had interrupted Gabourey Sidibe, for example. Somehow I doubt it.