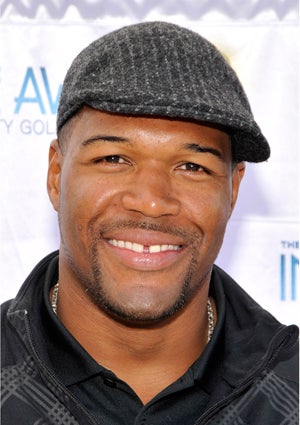 Former New York Giants defensive end Michael Strahan is a man of many laughs, but maybe one too many. The host of “Pros vs. Joes,” and football analyst on Fox NFL Sunday and fiance to Nicole Murphy failed to analyze his own actions on Twitter this past week when he blasted a joke to his 393,077 followers that many took offense to. He updated his status by retweeting, or RT’ing  (reposting another user’s message on Twitter) a message from @Superwomansf that asked the question, “If you have sex with a prostitute against her will, is it considered rape or shoplifting?” Strahan, not the original creator of the tweet, added his own “LMAO” to the RT, indicating he was, “laughing his ass off” at the joke.  Subsequently, in the the world of Twitter, when a status update is re-tweeted, it functions as a cosign to the original tweet, in this case the questionable joke. Not only was it a consign on the part of Strahan, but also a lapse in judgement. When will celebrities learn they can’t do the same things publicly that us non-celebrity folk can do without being heavily scrutinized? Celebrities must learn we live in a post-Tiger Woods era, where you could ultimately be stripped of everything you have for one mistake. Strahan, who endorses everything from Vaseline to Snickers, may have needed to think before he tweeted. On the other hand, a RT is nothing more than a friend telling you a joke in a bar, you laughing, and telling the next person, “Wait, you have to hear this…” Most jokes aren’t politically correct, which is usually why we find them funny. Just because Michael Strahan thought a one-liner from another person was funny isn’t reason enough for him to be stoned, but definitely put in check. Rape is and will never be an appropriate punchline. In reality, it’s the furthest thing from a laughing matter. Strahan joins John McCain, Russian President Vladimir Putin, David Letterman, Minesotta Democrat Al Franken, “Modern Family” actress Sofia Vergara, “Family Guy’s” Seth MacFarlane, and Italian Premier Silvio Berlusconi in the shameful “rape joke” club. Come on, people. Wake up.