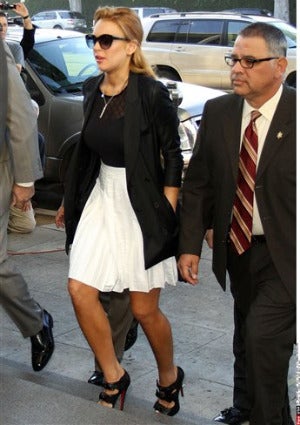 Even folks who routinely avoid entertainment gossip are probably vaguely aware of actress Lindsay Lohan’s never-ending saga of arrests, drug charges and illicit behavior. While the former child star has certainly seen her career take a turn for the worse in wake of her troubles, there is still a great deal of public support for her. Not just sympathy, but forgiveness for the actress — even as she seems unwilling to take responsibility for her misdeeds. (Does anyone recall her stealing a car in 2007, running over a man’s foot and then saying, “The Black guy did it!”? ‘Cause I do.) And if fans have had mixed emotions about Lohan’s wild ride, judges haven’t seemed to have much of a hard time at all giving the girl a slap on the wrist time after time after time. Just this weekend, she was released from prison after serving less than one day of a one-month sentence for violating her probation because of a failed drug test. This was her third imprisonment as a result of a three-year-old case involving driving under the influence of drugs and alcohol. Her first visit was less than three hours, and her second was 14 days of a three-month sentence, which she served just this summer. We know that in cases like this, celebs have it easier than us regular folks, especially considering that drug addiction is practically treated as a given in Hollywood, but do you think that a ‘can’t stay out of prison’ Rihanna would be gracing the cover of October’s Vanity Fair? Would she get chance after chance to keep messing up? I highly doubt it. While she might not get it as bad as the rock head from Crenshaw, I don’t doubt that the “Rude Boy” singer, on a third probation violation, would find herself locked under somebody’s jail for a lot longer than a day. And Black folks would probably be no less judgmental of her. I can hear the choruses of “That’s what she get!” in my head already. Must be nice, Lindsay. Don’t get me wrong: I have some level of pity for Lohan. She’s an addict, and each time a judge gives her another chance to walk free without a serious stint in rehab, she gets closer to taking herself out with her addictions. But I still can’t get past the fact that being White still gives this girl the chance to just run amok and buck the same laws that are unjustly used to make sure that folks who look like me are bound to ‘the system’ forever. And that this same young woman is then placed on the cover of these magazines all glammed up, talking about how she’s getting better. Double is still the standard for Black and White women. Don’t look for it to change anytime soon.