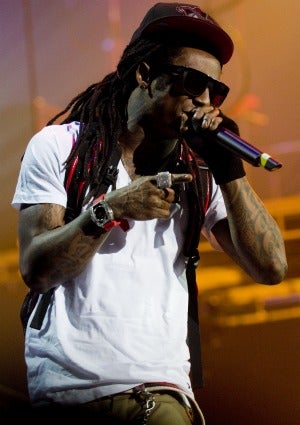 I’ma find ya if ya hiding I’m a bounty hunter/ In ya home putting dick all down ya woman/ You come home we in the bedroom counting money/ I bring her home and I f— her on a thousand hundreds/ Then I shoot the nasty bitch in the mouth for nothing.”  –“Get Down,” Lil Wayne If you’re looking for a representative of vile and violent rap, it would be hard to beat Lil Wayne aka “Weezy,” the ubiquitous rapper who was incarcerated in March 2010 on a gun charge and is expected to be released this week. His lyrics aren’t merely foul-mouthed, they’re also woman-hating, abusive and degrading… And yet, when he was led out of a New York courtroom to begin serving his sentence, he was cheered by adoring fans. And his short prison stint has only enhanced his “street cred.” His latest album, “I’m Not a Human Being,” arrives on September 27, his 29th birthday, while he remains behind bars. No doubt the rapper will resume the lucrative career that garnered him the fourth spot on Forbes.com 2010 Hip-Hop’s Cash King list, with an estimated $20 million made from his “Rebirth” album, guest appearances and grossing over $500,000 per live show.   There is something very much awry here. Why are we, particularly young Black women, celebrating a blinged-out, tattoo-covered misogynist who impregnates one woman after another as if parenthood is no more serious than a frat party? Father of at least four kids — all of whom have different mothers — Lil Wayne has two children born just two months apart, which hasn’t dwindled the adoration from female fans. Think about it: When Don Imus smeared the women of the Rutgers basketball team as “nappy-headed hoes” three years ago, Black Americans erupted in righteous indignation, and Imus was temporarily driven off the air. I know, I know. Black America isn’t alone in idolizing Lil Wayne. He has been interviewed by Katie Couric and appeared on “The View.” His music sells very well internationally. His sixth album, “Tha Carter III,” has sold 3.5 million units so far, according to Nielsen SoundScan.   But given the violence that already stalks our neighborhoods — homicide remains the leading cause of death for young Black men, according to the Centers for Disease Control and Prevention — we hardly need another “role model” who glorifies murder and mayhem. Among Lil Wayne’s many tattoos are four teardrops on his cheeks. In gangland symbolism, that can signify that he has taken four lives. He has admitted to constantly sipping a powerful prescription cough suppressant, a combination of codeine and promethazine, and he raps in praise of narcotics-fueled flights of fancy. By all accounts, Lil Wayne, born Dwayne Michael Carter, Jr. in New Orleans, was a very bright kid. His parents split when he was a toddler, and his father played no role in his life. When he was still in elementary school, he says, his mother started dating a drug dealer. That seems to have set Carter on a dangerous path. By age 12 he had shot himself in the chest with a .44. By 14 he had dropped out of school. And by 15 he was a father. Although he has since received his GED and started college, along the way he has also had several arrests. A combination of good lawyers and perhaps good luck has helped him survive the violence he glorifies. But our young Black men who try to live as Lil Wayne does probably won’t be so lucky. They’ll end up paying the price — doing a long stretch in prison or even worse, becoming another statistic lying dead in the streets.