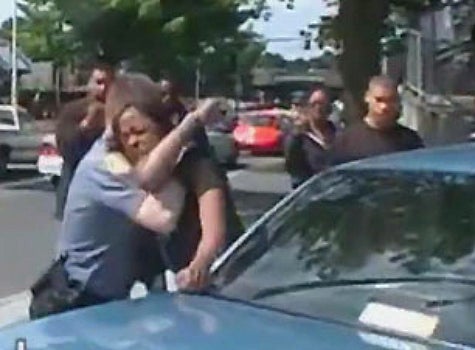 I vividly remember the night of April 29, 1992. I was in a South Central Los Angeles high school classroom mentoring a group of high school girls, when a campus security guard kicked in the door. He was yelling at us to get to our cars, drive north or west — any direction away from South Central. Unbeknownst to us, we were caught directly in the crosshairs of the aftermath of the Rodney King Police Brutality Trial. The now infamous trial revolved around a videotape a bystander captured of police officers tasering and beating King with a baton. The videotape did not change the verdict in the criminal trial — the police got off, but it did rewrite history as angry Los Angelinos took to the streets in protest — rioting, burning and looting until the police and national guard restored order 3 days later. Just this past week, most of us sat stunned as we watched Seattle police officer Ian Wyatt clock a 17-year-old girl in the face like Mike Tyson. A bystander videotaped this incident after the officer stopped the girl and her friend for jaywalking. No charges have been filed to date, but the video underscored the importance of videotapes in the omnipresent debate of police brutality and excess force.   In each of these cases, a bystander videotaped an on-duty police officer, yet in several states, the police officer can actually haul the bystander off to jail. Their crime: videotaping an on-duty officer. Currently Pennsylvania, Maryland and New Hampshire make it illegal to videotape an on-duty officer, and many other states are trying to enact similar laws. The states are relying on their “two party” wiretapping laws (where both parties must consent to a recording) to make it a felony to videotape an on-duty officer. These laws are premised on an individual’s “reasonable expectation of privacy,” however an on-duty officer doesn’t have a reasonable expectation of privacy while performing his job in public. In criticizing these laws that enable the officers to hide behind a “cloak of privacy”, Massachusetts Chief Justice Margaret Marshall declared that, “Citizens have a particularly important role to play when the official conduct at issue is that of the police.” Police officers are permitted to use force, carry weapons and detain individuals on probable cause. Arming public servants with such broad powers mandates accountability, not privacy, and the videotape often serves as a system of checks and balances.   Police officers are hired using our taxpayer dollars. Therefore we citizens, who are actually their employers, should have the ability to monitor our employees without fear of criminal reprisal. Many courts have held that employees have no expectation of privacy in performing their job duties and allow employers to monitor employee email. It seems then, that a pencil-pushing employee has no reasonable expectation of privacy in emails addressed to her personal or office inbox while on the clock, yet a gun-toting, baton-wielding officer can beat me into submission on a street corner/aka his “office” on that same clock, and go about his business unchecked? Adding insult to injury (pun intended), after my beatdown, it is legal in these jurisdictions for the policeman to saunter over, take your camera, and charge you, the videographer, with a felony! Hmmm, still scratching my head on that one. Videotaping, like monitoring email, allows the employer to hold the employee accountable, and often serves as a victim’s best defense against an officer’s use of excess force. History has shown us that juries are more inclined to believe the officer, who has chosen to “serve and protect,” than the victim who is more often than not a so-called racial “minority,” no matter how heinous the conduct. The videotape and the email provide an unbiased account of the goings on in the workplace. It is imperative that I, the employer, be able monitor my police officer employee while he is patrolling my hood. And of course, my employee officer has a reasonable expectation of privacy… just not on my watch.