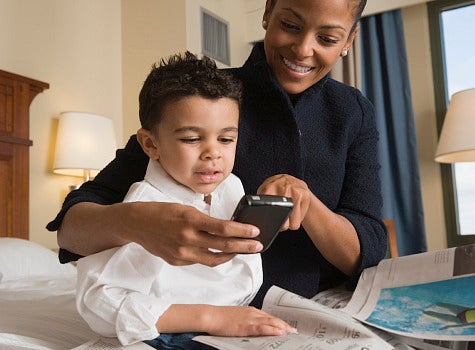 Atlanta television and radio producer Nina Brown is a self-confessed Blackberry mom. Here she writes about the guilt of always having to be connected to her Blackberry while being mom to her son Jaylen. I recently took my nine-year-old son Jaylen to the doctor because his father and I were worried about his hearing. As we sat waiting for the doctor I noticed I wasn’t getting good reception on my Blackberry. As I tried to quietly sneak to the other side of the waiting room so I could get better reception, my son was like, ‘Mom, really? Can you just put the Blackberry away?” It seems like the story of my life. I immediately gave Jaylen the side-eye like, ‘Excuse me, what did you just say?’ But he knew what I was trying to do: be on my Blackberry, again. I’ve been a producer for ‘The Frank and Wanda’ morning radio (and now television) show in Atlanta for the past five years. During the week I get up at 3:30am, I’m at the station at 5am and the show starts at 6am. But my day doesn’t end at 10am just because the show is over. I’m constantly on my Blackberry booking artists, returning emails about upcoming events or just staying in the loop about the entertainment industry. Between text messaging, instant messaging and emails I probably get a good 60-75 emails a day and out of 24 hours I’d say I’m on my Blackberry at least 16 hours a day. It’s a non-stop job that I love but I will admit I am extra with my Blackberry. My son Jaylen is so over it. He’s always like, ‘It’s you and your Blackberry mom. You and your Blackberry.’ I don’t even sleep soundly because my Blackberry will go off and I just have to get up and check it. It’s the first thing that I do when I wake up and I probably check it at least twice throughout the night. I’m the type of person that has chargers everywhere. I can’t even remember the last time my battery died and I didn’t have a replacement. Jaylen’s dad and I are no longer together but we have the best relationship two people who aren’t together can have so our son is a very well-balanced kid. By now he’s used to my fast-paced always-on-the-go lifestyle. Mommy’s infamously late. Mommy’s on Twitter. And mostly he knows Mommy’s always on her Blackberry. Luckily he’s mature for his age, but I can’t help feeling guilty about how much time I’m spending on my Blackberry. Raising a child while working in the entertainment industry can be challenging because you never think there’s enough time. And the time that I am with my son I find myself having to be on my Blackberry. He’s so used to it that he can grab my Blackberry and type you a whole message with the correct punctuation. He’s better at the game Brickbreaker than anyone I know. He even asked for a Blackberry for his birthday and I was like, ‘Are you kidding me, you need to get a job first.’ We laugh about it but I feel guilty because staying connected has become so innate to me. It’s like second nature. Frank and Wanda are always getting on me because I’m one of those people who can type without looking. They’re like, ‘Nina, your fingers have a permanent dent in them because of all that typing.’ I’ve come to terms with the fact that I’m a modern parent learning to juggle the demands of a career with raising a child in a tech-savvy world. Lately I’ve been making a conscious effort to literally move my Blackberry to the side and be like, ‘This is the time I need to spend with my son.’ I try to balance it out by saying okay if I go hard this week, then the next is all about my son. I need to be on the scene and stay connected because of the industry I work in but I’m learning to pick and choose wisely. Nina Brown is a radio and television producer of ‘The Frank and Wanda Show’ on V103 and CW69 in Atlanta. Read More: