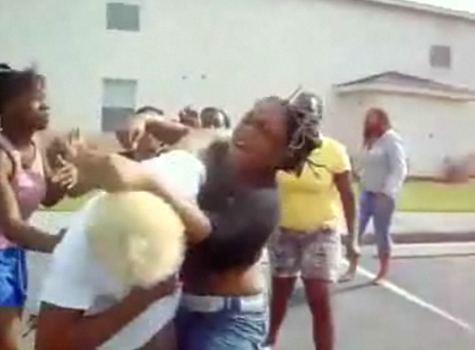 Remember the old nursery rhyme about little girls being made of sugar and spice, and everything nice? Well, it’s 2010 and that recipe has drastically changed. Just ask Chicago’s Satiya McBee, who was recently videotaped being beaten by a group of extremely “spicy” girls. Hailing from Chicago’s Southside neighborhood, these ladies call themselves Lady Mob. McBee, a sophomore at Bogan High School, was recorded being ambushed and viciously attacked by girls from Lady Mob on a public bus. After attempting to drag her off the bus, McBee was left with hair completely ripped out of her head. Just last week, a 14-year-old girl fell victim to a gang-related beatdown at Salinas High School in California. The teenager suffered serious lacerations and bruises, and to top it off, the attack was taped and posted on YouTube. Her attacker? A 15-year-old classmate. The recent occurrences of girl-on-girl violence, whether gang-related or not, do not seem to be coming to an end anytime soon. According to the 2008 National Survey on Drug Use and Health, approximately one in four girls between the ages of 12 and 17 have been the perpetrator of, or have participated in, a violent act at school or work. Shockingly, this pushes the percentage of girls involved in violent behavior to 26.7 percent, slightly higher than the 25.4 percent of boys involved in such behavior. Why are our young ladies so vehemently violent? Forget the days of gossiping and starting rumors, more young girls today seem to be turning to physical brutality to express their aggression. The way these girls are savagely fighting and recording their acts of violence, one would assume that this behavior is based on something much bigger than a simple disagreement. Perhaps these young ladies aren’t being taught what it means to be a lady. This rise in violence among young females also demonstrates that an increasing number of our girls think it’s appropriate to exhibit what is typically labeled as “boy behavior.” According to statistics compiled by HelpingGangYouth.com, 32,000 young girls are involved in loosely structured “gangs” — banding together most times for protection, identity and to explore their sexuality. Many of these girls grow up in homes lacking a father figure — and in turn, the mothers are subconsciously and indirectly teaching their daughters to be the man, and a woman. This warped “more than a woman” mentality confuses these girls and may be one of the causes leading to such violent outbursts. With so many of our girls finding themselves in these bleak circumstances, the bigger question is: why are we quietly entertained by it? Girls fight dirty; no rules and no mercy. Some look on disgusted yet entertained by the shock value of it all. Many of the teens giving the beatdowns are gaining twisted notoriety from the violent videos of their transgressions. CBS News stated in February that local educators report about 80 percent of school fights are now girl against girl, a trend fueled, in part, by the Internet. These girls aren’t recording their fights for nothing. Sites like GirlFightsDump.com, AlmostKilled.com, and ExplosiveFightVideo.com, along with viral video king YouTube, give these disturbing videos a platform to be posted, viewed, discussed and shared. While there is not an exact figure, there are an estimated eight million hits online for videos depicting teenage girls fist fighting. No one is pointing a finger, but if these videos are getting this kind of web traffic, I wonder how many of those tuning in are mature, sensible adults? What’s scary is, if they are tuning in,  why isn’t anybody stepping in? With little to no social intervention, maybe this is why Chicago’s Bogan High has yet to take action in response to McBee’s attack. By not speaking out against this trend, perhaps we are glorifying the violence among our little girls, or just becoming numb to it like we have with our boys.