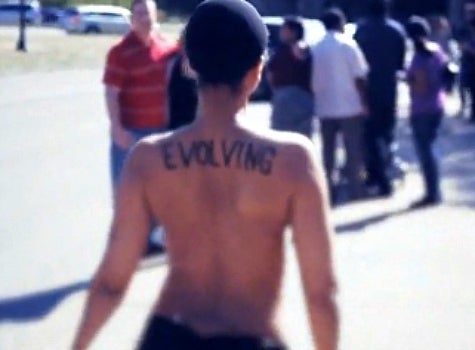 That Erykah Badu video done stirred up some ish, huh? I’m sure I was one of many anticipating the release of Badu’s sixth album, “New Amerykah Part Two: Return of the Ankh” as much for the11-track disc as the accompanying media storm. Like many folks, I’m a die-hard Badu fan, even stood on a balcony waiting until 2AM for her to perform on Saturday night (feet hurt like hell, but she was totally worth the wait). I devour her music because she’s remained one of the few mainstream artists who infuses her music with a message and pushes the artistic envelope. You never know what to expect with Badu, but you know it will be good (there’s a track on this disc, “Out My Mind, Just in Time”, that trumps “Green Eyes”). That is precisely why I promptly logged on to her site at first word that her video for her first single “Window Seat” was debuting on a dotcom near me. (Watch the video here.) It started with a Caddy in Dallas. An understated Badu emerged in an uncharacteristically tame ensemble of… sweats? Oooookay. But a barefaced, tame Badu couldn’t be all there was. I’d already read her tweet (@fatbellybella) that promised something good was coming. She wrote: “Window Seat was shot guerilla style, no crew, one take, no closed set, no warning, two minutes, downtown Dallas, then ran like hell.” So, she’s walking down the street and she’s taking her clothes off. By the time she’s down to a bra and sweats, I see “Evolving” sketched across her back with all the subtly of Laurence Fishbone shouting “Wake up!” in “School Daze.” Then she takes off her pants. My only shock is that I had no clue Badu was stacked like the international house of pancakes. I’m more amazed though that she is strutting through a city street in the equivalent of a bikini with a confidence–back straight, head high, strut fierce–I can’t muster on a even an empty beach after a winter of daily workouts. Then she takes off her bra, letting her bee stings breathe (admittedly a good feeling as I discovered once on a Barcelona beach).  Seconds later, she’s butterball nekkid in the middle of the street. She’s then gunned down, a none-too-subtle reference to JFK, another person who dared to be different, and met his end on a Dallas street. As Badu bleeds blue, naked and unashamed like she’s in an urban Eden, she blesses us with a voiceover that basically explains the message of the video, the song, and Badu music in general. It’s for the people who weren’t taught critical thinking in high school. “They who play it safe are quick to assassinate what they don’t understand,” she begins. “They move in packs, ingesting more and more fear with every act of hate on one another.” She made it real, real simple. Which is why I’m slightly ticked that so many people missed the message and only saw the nudity. (I know from the response to Serena Williams nude on the cover of ESPN, what to expect by now so I’m no longer baffled.) I was reading responses on my favorite gossip sites that also provide real entertainment news and shamefully shook my head at some of the video’s feedback. “I see Erykah is resorting to doing hoe shit now to sell records. [Her message could] have been conveyed without her showing her ass.” “Nudity outside your individual four walls is seriously uncalled for.” “Typical…black women stripping nude in a video and debasing themselves. And you wonder why you are the least respected and sought after.” Huh? Um, the video, and Badu, in general, are deeper than that, people. And a nude woman, Black or otherwise, doesn’t mean she’s selling sex. Why is it when anybody non-Black poses nude and shows her whole backside it’s a fart in a mitten, but when women hued like me do the exact same thing, we’re on some “hoe shit?” What makes my body in its natural state trashy and someone else’s–especially someone paler, thinner, with less pronounced curves–“art”? What is it about our figures that we feel compelled to cover, hide, and contain (I can’t be the only one that was shamed into a girdle before my 13th birthday)? And just so we are clear, I’m not asking why other people shame us; I’m asking, Black women, why we do it to ourselves? I asked as much on Twitter (shameless plug: @abelleinbk) and the responses, from my thinking friends, were varied. A preview: “Black women are scarred. When you touch an unhealed wound even to heal it, it hurts.” “If those people were truly free, or seeking freedom, they would see Badu’s video as a call to arms, or rather dis-arm, to get free!” “Just goes to show how important it is to have schools with art programs because Black people just aren’t raised to think out of the box at all. On a whole all they see is a naked woman and for them that equals sex. Nudity means so much more than sex.” But I guess what summed it up best, was less than 140 words from my BFF since I was 13. She wrote: “People have to be comfortable in their own skin before they can be comfortable with someone else’s.” A lot of us, as evidenced by the Badu backlash, aren’t too comfortable, are we? Discuss. Read more: