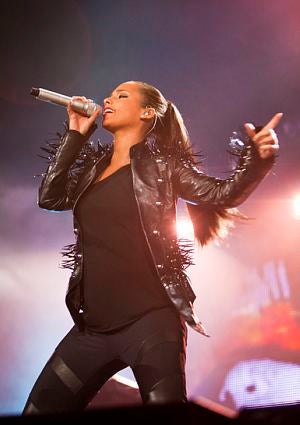 Be warned: Alicia Keys, Beyonce and Mariah Carey are on official Bump Watch, as in “Girl, what’s really going on under that shirt?” Uh-oh, we see a tiny bump. Girl, you’re pregnant! Or maybe not. If you recall. Beyonce has been on bump watch ever since she and Jay-Z walked down the aisle, and a seed has yet to materialize, three years later. As soon as Alicia Keys was photographed performing in loose clothing for her “Element of Freedom” world tour, the rumor mill got to work speculating on whether she was with child. Questions swirled about her imminent wedding to Swizz Beatz, because you know, in our minds it’s the natural thing to do when a woman gets pregnant with her boyfriend. It’s been nearly two weeks since Alicia was photographed and a Google search of “Alicia Keys pregnant” turns up over 800,000 entries. Really? Do we care that much? A tabloid recently ran a photo of Beyonce before the White House State Dinner with a huge pink arrow pointed to her belly. “Baby on Board” it said. What are the signs? Weight gain. Check. Letting her roots grow out because she doesn’t want any chemicals in her body. Check. And the kicker: a “source” told the tabloid she was spotted drinking water at a nightclub. The whole night. We may joke and occasionally start casual conversations like, “So, do you think Alicia’s pregnant?” A sane friend may answer, “Who cares?” but many will engage us and “go in” on the situation. Underlying all of this chatter is a question we all need to ask ourselves: What is our fascination with seeing famous women pregnant? It’s almost as if we want to project some ideal of what a woman of a certain age MUST want. She’s got the fame, money and man. Now comes the baby. In a recent interview, actress Kerry Washington said a baby is not on her radar. Can you blame her? Why do we expect a woman at the top of her game to step aside to become a mom? (Sidebar: let’s be honest, having a child means “away” time.) And besides, as one commenter on a blog so eloquently put it: “Is Alicia Keys related to me? No. Is she paying my light bill? Heck, no.” I’m gonna leave her alone until she’s ready to tell us she’s expecting. Why do you think we pay so much attention to celeb baby bumps?