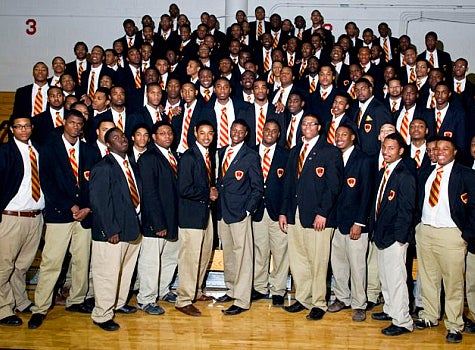 When good news happens to Black boys, are we ecstatic because they broke the stereotypes of others or are we actually ecstatic because, we too, have believed those stereotypes? Have we secretly given up on our Black boys too? I’m concerned. Last week the internet broke out in joyful glee over a story about a new all-male public school in Chicago that graduated its first class with all the students attending a four-year college. Englewood’s Urban Prep Academy for Young Men is an amazing institution in one of Chi-town’s most troubled neighborhoods. But by creating an environment to succeed and fostering high expectations, every Black male rose to the challenge. Even though the school’s founder said only 4 percent of this year’s senior class read at grade level as freshman. Four years later, at last count, the 107 seniors gained acceptance to a total of 72 different colleges, including Northwestern University, Morehouse College, Howard University, Rutgers University and University of Illinois at Champaign-Urbana. What a powerful testimony to the true potential of young Black males. The pictures alone gave me goose bumps. The comments in the blogosphere were incredible!   But then it made me wonder if all the tears of joy and virtual hallelujahs were for positive media or for re-convincing ourselves? Were we happy that the media finally saw our boys in a different light or were we happy because we, too, had started to write off our young Black men? I’m worried that we may have internalized and believed those stereotypes about who our young Black men are and what they are capable of. As far as I’m concerned, we should expect to see a class of young Black men in a supportive environment going to college instead of jail. We should know that the general educational system often fails our youth, especially our boys. And that they can and will succeed in the right educational environment when surrounded by the proper constructs and teachers who don’t see them as statistics or future athletes. We know that our young Black men are gifted beyond limits.   So, when we see our young Black men standing tall, doing well, going to college and having dreams beyond a recording studio or the basketball court then we should say, of course! I knew it all the time. Let’s not drink the media’s “kool-aid.” In the meantime, our job as parents is to counteract the negative influences of the streets and create a new idea of what is normal for our youth. I’m not sure that lowering our expectations, such that getting an education and creating a better life for yourself, merits a ticker tape parade, is the way to go. That should be what we expect from our boys and girls.   When I went to college, there were no poms-poms in my parents’ hand. Sure, they were proud. But going to college was an expectation in my house from day one. No negotiations. In fact, when I graduated high school and was accepted to NYU, I was promptly told that instead of a big graduation party we were having some cake and ice cream at the house because my share of the money pot was being put toward the Fall tuition. Going to college was an expectation that was breathed into every aspect of my parents’ child-rearing from early on.  And as Black parents, we have to raise the bar for our children, from the inner city to the outer suburbs, that they too are college bound. There will be no parade. There will be no media coverage. And you might have to settle for ice cream and cake for your high school graduation party so we can pay that bill.  But at the end of it, you will have a life of options.   And this will be our new normal for Black youth. Press releases not necessary.   In about 12 years, my son will go to college. Yes, he will. I know this.  And I will say, “Son, I’m so proud of you. You have done what you ought to have done.” Kimberly Seals Allers is a leading voice on the African American motherhood experience. She is the founder of MochaManual.com, a daily online parenting destination, author of The Mocha Manual series of books, and blogs for Momlogic.com, Babycenter.com and LifetimeMoms.com. An award-winning journalist, Kimberly is a former senior editor at ESSENCE and former writer at Fortune and lives in Long Island, New York, with her two children. Read more: