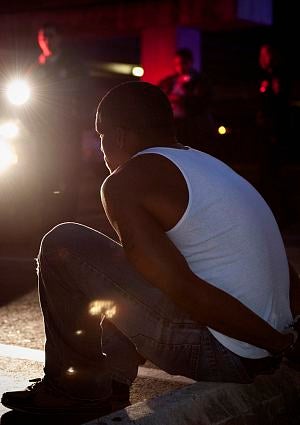 In the past two weeks, we have heard (and said) much about the death of Aiyana Jones. As we should. We should speak her name until there is justice. We should scream her story until it wakes up the masses of people in this country realize what centuries of racism have done to our ability to live freely. How this poison has the very hands trained to protect us tightened around our necks, making it impossible to breathe. We must continue to speak of Aiyana. But what about Thomas Wortham? Thomas Wortham was an officer of the Chicago Police Department for nearly three years. He served the Englewood District, an area that is the veritable epicenter of Chicago’s increasingly dangerous reputation. Wortham went above and beyond the call of duty, working to organize members of the community to respond to the violence that has plagued the city for so long. He also served two tours of duty in Iraq. On May 13, 2010, Thomas Wortham lost his life. Not while on duty. Not in the trenches of Iraq. The 30-year-old was murdered in front of his parents’ home in Chatham, one of Chicago’s Black middle-class enclaves. He was shot after a group of young men attempted to steal his motorcycle. His father, a retired Chicago Police Officer, emerged from his home with a gun and managed to kill one suspect and critically wound another. It seems that a story like this — marked with extraordinary violence, the cruel irony of a man coming home from war only to be killed by young men who are essentially his neighbors, the brave attempt of a father to protect his family — would have made national headlines. However, it seems that there has been little said about this tragedy outside of the Chicagoland area. Why is that? We seem to have accepted the loss of Black people at Black hands to as simply a reality of Black life. Are we convinced that we can do no better? Do we not realize that the more of our own blood we spill in our streets, the more open we are to police officers ruling us in the same ill-trained, fearful manner that caused Aiyana’s death? There have been at least 141 homicides in Chicago this year. Of them, approximately 109 of the victims were Black. And that’s not to mention Detroit. Baltimore. Philadelphia. DC. Brooklyn. Aiyana’s death was a shock to the system. It was the unhealthy relationship we have with the police coming to the most deafening fever pitch. Thomas’ death was an all too familiar scenario: a young Black man’s life cut down by fellow Black men. Like slain Jersey City couple Michael Muchioki and Nia Haqq, Wortham was one of “the good ones”; an asset to his community and killed by their own hands. We haven’t reconciled the level to which decades of crack addiction, generational poverty and total despair have created monsters amongst us. Seemingly soulless creatures who cut lives short, only to be caught with “no visible remorse.” We have gotten used to the idea that there is a segment of our population that seems to serve no purpose other than to annihilate, maim and destroy. And we have allowed ourselves to forget that for every Aiyana, there are a dozen more who will be lost at the hands of their own brothers and sisters. We must remember Aiyana. And we must remember Thomas. And we must find a way out of this nightmare. Before we can demand that anyone else values Black life, we must value it ourselves. Jamilah Lemieux writes about race and culture on her blog, The Beautiful Struggler.